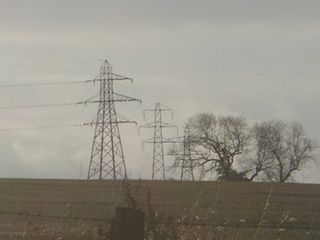 Welcome to the first pylon of 2010.  Regular visitors to the website will have noticed that there was no pylon for December 2009.  I never quite got around to posting one in the early part of the month and then it seemed to me that there was already enough excitement in the lead up to Christmas without Pylon of the Month adding to it.  This month's pylon is from yet another anonymous fan of the website.   It is located in Tibbermore just outside Perth in Scotland and so is the first pylon from North of the border to feature on the website.  You may well be aware that pylons are quite a contentious isssue in Scotland at the moment. Permission has just been granted for a line of 600 pylons to carry electricity generated in the North of Scotland from renewable resources.  It is an issue that has split the green lobby with Friends of the Earth welcoming it, whilst other environmental groups pushed for the cables to be buried underground or taken under the sea.  The extra cost that this would entail was considered uneconomic by the public enquiry that considered the matter.