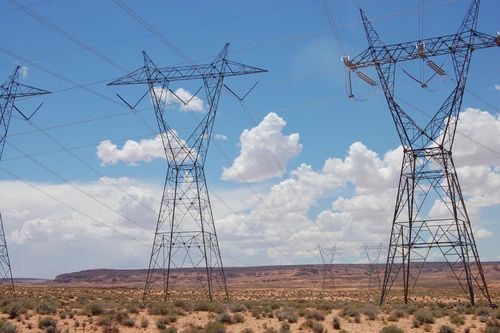 After last month's rock and roll pylon, I decided to head abroad again with this picture submitted by yet another fan of the website.  The pylons are in the Arizona Desert near the City of Page ("the center of canyon country") and almost certainly carry electricity away from the coal fired Navajo Generating Station.

You can tell that pylons aren't in the UK just from their design and after watching the fantastic Secret Life of the National Grid on the BBC this month, I am a little more aware of the thought that went into designing the UK pylons.  I have mentioned the the man behind the design before, architect Giles Gilbert Scott, although he is more famous for designing the famous red telephone box and Battersea Power Station.  What I didn't know until I watched the programme was that the word pylon comes from the Greek word for the monumental gateway to an Egyptian temple.

I have to thank the BBC website for quite a lot of traffic recently (average page views per day is now at 28.93) and the Independent newspaper has also featured the blog in a couple of articles.  The first one brought to my attention was by Terence Blacker and was about the 'Secret Life of the National Grid' mentioned above.  Entitled 'Pylon fanciers will love this BBC propaganda'.  He says 'There are those who love pylons for their own sake. The more beautiful their rural setting, the happier the pylon-fanciers are.'  Whoa; steady on Terence.  I happen to be a passionate hill walker and climber and would not want to see pylons in the more beautiful areas of the UK.  In fact I'm inclined to agree with the point in your earlier article, that we put too low a value on the effect of pylons when doing the cost-benefit analysis, but there has to be a degree of realism.  I don't love pylons for their own sake, but I do think that we take the National Grid and the associated pylons for granted.  I also think that we undervalue engineers and the amazing things that they achieve in the UK.  And for what it's worth, I think we have the most aesthetically appealing pylons in the world.  At least, the TV critic of the Independent, Tom Sutcliffe, saw me in a more favourable light.  When reviewing 'The Secret Life of the National Grid', he wrote "I am grateful to it, though, for indirectly leading me to the Pylon of the Month blog – a celebration of global pylon design which proves that no object, however unlikely, is exempt from human enthusiasm."

There you have it in a nutshell. Not love, not worship, but enthusiasm.  An enthuiasm for pylons.

Hi,
maybe this one is also interesing for you.

Europe’s first cross border Transmission System Operator TenneT installed the first three new, innovative high-voltage pylons today in the west of the Netherlands. Six of these pylons, known as Wintrack, will be installed in total. The innovative design consists of two slender pylons from which the high-voltage wires are suspended.

Volker Wessels Telecom Network Solutions are responsible for the construction of the pylons, which have been designed by Zwarts & Jansma Architects in collaboration with the research agency KEMA. TenneT is building a high-voltage substation along the A12 motorway near The Hague (Bleiswijk) that will form part of a large-scale grid expansion in the Randstad conurbation.

Reduced magnetic field
The Wintrack concept consists of pairs of pylons (referred to as ‘bi-pole’) whereby the wire bundles between the poles (conductors) are secured above one other. This means that, in contrast to the familiar lattice towers currently in operation, pylons have no broad arms from which the conductors hang next to each other. The high-voltage wires also hang closer together than in existing high-voltage pylons, thus reducing the intensity of the magnetic field generated along the route of the high-voltage connection. As a result of the Wintrack concept, optimum use can be made of the space available around high voltage lines.

TenneT wants the new pylons to be employed on a large-scale basis in infrastructural projects throughout the Netherlands. More than 450 km of new high-voltage overhead lines will be constructed over the coming years in the north, east and west of the country.