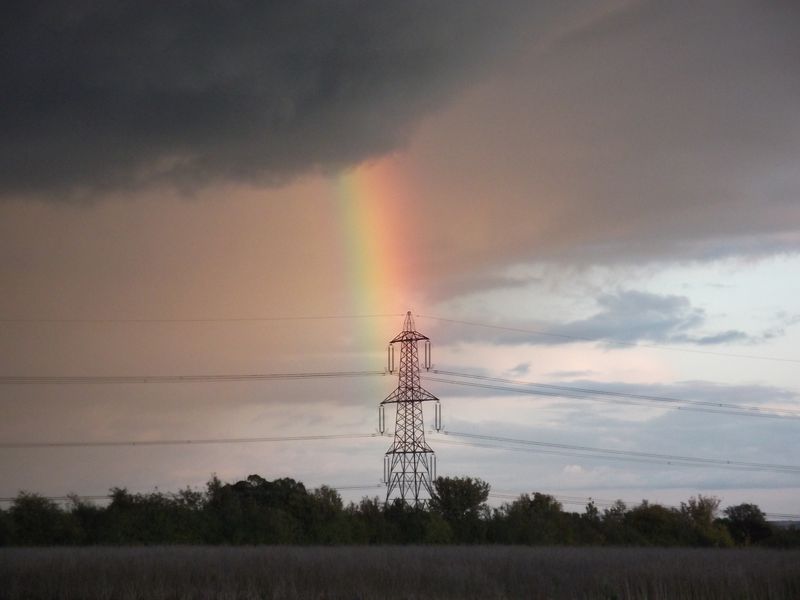 Happy New Year to pylon fans everywhere.  After a Christmas break where I failed to get any pylon pictures with accompanying snow and ice I decided to start 2011 with this rather marvellous image taken by a pylon fan very close to Radley, a few miles outside Oxford.

I like it on a purely visual level and if all you want from Pylon of the Month is a chance to look at pictures of pylons then you might want to stop reading now. ......

because the picture could also be seen as a metaphor for what some see as the battle between science and the arts.  I probably need to explain in a little more detail!  As I discussed in a recent post, pylons are frequently seen as the all to obvious symbols of technology riding roughshod over aesthetic and environmental concerns.  It was Keats who first used the rainbow in the argument between the arts and science when he accused Newton of destroying its beauty by explaining it.  It inspired Richard Dawkins to write 'Unweaving the Rainbow' which argues that understanding actually enhances our appreciation of the beauty rather than destroying it and I'm with him on this one.  Richard Feynman, one of my scientific heroes, also had this to say on the subject:

Poets say science takes away from the beauty of the stars — mere globs of gas atoms. Nothing is "mere". I too can see the stars on a desert night, and feel them. But do I see less or more? The vastness of the heavens stretches my imagination — stuck on this carousel my little eye can catch one-million-year-old light. A vast pattern — of which I am a part... What is the pattern or the meaning or the why? It does not do harm to the mystery to know a little more about it. For far more marvelous is the truth than any artists of the past imagined it. Why do the poets of the present not speak of it? What men are poets who can speak of Jupiter if he were a man, but if he is an immense spinning sphere of methane and ammonia must be silent?

So if you want to appreciate this month's pylon picture on a deeper level, then for more on the origin and background to Keat's comments, I can't recommend Richard Holme's book, 'The Age of Wonder' too highly.  Prior to this book, he was better known as a biographer of Romantic poets but this is an excellent account of the close interplay between science and the arts in the 18th and early 19th centuries.  For an account of the physics behind rainbows, here would be a good starting point.

I'm so glad I found this site! I'd love to submit a couple of photos but I'm not sure how... Please let me know!