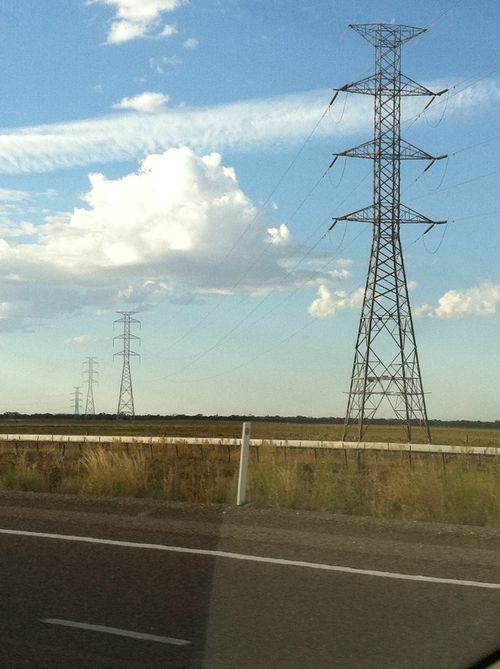 This month's sees Pylon of the Month in the southern hemisphere for the first time.  A fan of the website from Australia sent this picture with the following information:

"Here are a few snaps from a recent road trip from Adelaide, South Australia to Melbourne, Victoria."

I use Google Analytics to see where my blog traffic is coming from and having just checked it, I can see that out of 32,781 visits since I started in June 2008 only 42 are from Australia.  If you really want to dig into the detail, 30 are from Adelaide, 8 from Sydney, 2 from Brisbane and 1 each from Perth and Melbourne.  The average time on the blog is just over a minute from Adelaide, but the lightweights from Brisbane can only hack it for an average of 27 seconds.  I'll be watching over the next few weeks to see if this changes.

Like the UK, Australia has 240V 50Hz electricity, and here are a few electricity factoids for Australia (from the World Nuclear Association website, so perhaps not entirely independent).

*TWh is Terawatt hours where Tera means 1 x 1012 or a thousand billion.