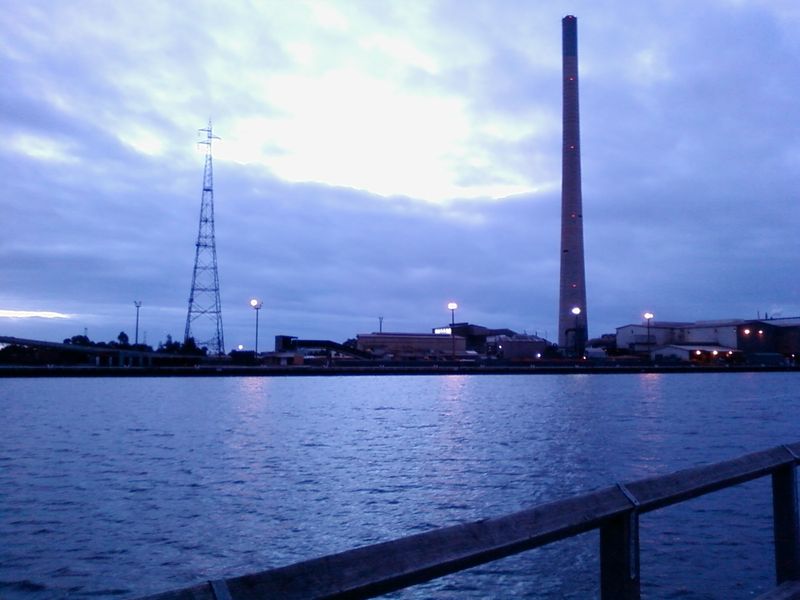 Where did March go?  Despite all my good intentions, I wasn't able to make time to post a pylon and as the first week of April slipped by I realised that something had to be done.  So here is another Australian pylon to follow on the back of the last one which successfully raised the profile of Pylon of the Month down under.  Last month I wrote:

So 327 visits from 11 cities is a pretty big improvement.  I won't mention the bounce rate, or the average time on site because I want to focus on the good news!  Yet again, Adelaide seems to be leading the way so it is definitely top of my list of cities to visit in Australia.  To be honest, it already was because I am a big cricket fan and would love to see a test at the Adelaide Oval and visit the surrounding wine growing regions.

This months pylon is at the Port Pirie lead smelting plant.  The supplier of the picture had this to say:

That plant.....is the Port Pirie lead smelter, the largest in the
world, and the flue to the right of the photo is 205m tall and is set a
hundred metres or so back from the wharf (just to give you an idea of the
size of the pylon.

The plant is owned by Nyrstar and (according to Wikipedia) also produces refined silver, zinc, copper and gold.  All these elements (along with lead) have a larger atomic number than Iron and so can only be produced when a massive star dies in a supernova explosion.  I'm not going to try to explain stellar nucleosynthesis here, but suffice to say that all the metals produced by the smelting plant at Port Pirie are recycled from the supernova that happened in our part of the universe billions of years ago.

So there you have it.  Pylons, Australia, lead smelting and stellar nucleosynthesis. And some people think that Pylon of the Month is boring.