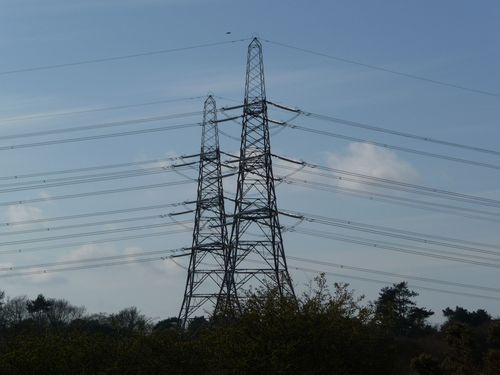 This month we head off to Suffolk, but before I say any more, I thought that I would give you an insight into how this month's pylon came to be chosen.  It is actually the first of my own photographs to feature for some time, because I have been inundated with pictures from across the globe recently .  But I thought I would take a break from foreign pylons until next month.  So this one was taken on a family holiday to Suffolk in Easter 2010.  After a lovely walk along the coast we returned to the car, which was parked near Sizewell, the site of two nuclear power stations. Sizewell A is now closed and being decommissioned, but Sizewell B remains operational and is Britain's only commercial Pressurised Water Reactor (PWR).  As we drove back to our cottage in Orford I snapped the pylons just after passing Sizewell.

So so far good, but I take a lot of pylon pictures that I never use.  This one popped back into my mind when I went to see Maggie Hambling speak at the Oxford Literary Festival just before Easter this year.  She was talking about her new book on the controversial scallop sculpture that she designed and which can be seen on the beach at Aldeburgh.  It wasn't controversial with us, we loved it, but it has been defaced on a number of occasions by others who feel that a man-made object on the beach is inappropriate. 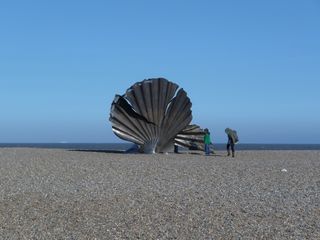 Anyway, it is dedicated to Benjamin Britten (who lived and worked nearby for many years) and has words from his opera Peter Grimes, "I hear those voices that will not be drowned", cut out from the metal.  Then a couple of months later, a colleague went to see the English National Opera's production of Britten's opera "A Midsummer Night's Dream".  This was also controversial.  As the Daily Telegraph put it, "ENO's shocking new paedophile Midsummer Night's Dream is brilliant, but I hated it".  Then, whilst driving back from Oxford on a Saturday morning, I heard Radio 3 discussing Britten's Serenade for Tenor, Horn & Orchestra and enjoyed the chosen recording so much that I downloaded it from itunes (it is playing now as I write this).

So with all the Benjamin Britten episodes in my life recently, the Suffolk pylon was chosen.  Not all the pylons have such an interesting back story, so this one seemed worth writing about.  If you've made it this far, I hope that you agree.