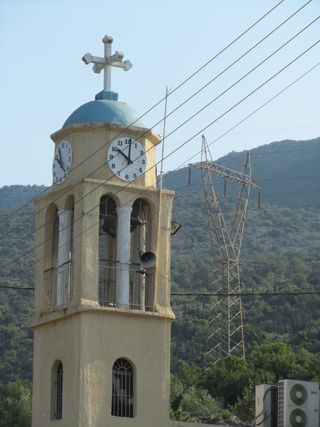 Tweet After a break from pylons in July, Pylon of the Month is back again and as summer is with us it is time for the pylon picture taken on my holidays.  This year, it comes from Greece and it was taken in the village of Agios Floros just north of Kalamata (famous for its delicious olives) as we drove back to Athens after a wonderful two weeks on the Mani peninsula.  We stayed in Kardamili, a small but beautiful village that until recently was the home of the famous travel writer Patrick Leigh Fermor.  His book, Mani, is well worth a read if you want to get a feel for this part of Greece as it was in the 1950s.  His most famous book, however, is probably 'A Time of Gifts' which tells the story of the first part of his walk from the Hook of Holland to Constantinople in the 1930s.  He fought in the Second World War and led the raid that captured and evacuated the German Commander from Crete as made famous by the film ''Ill met by Moonlight'.

On one day trip we went to Pylos and it did occur to me that there might be a link between Pylos and pylons.  If there is I can't find it, but I did stumble across an excellent discussion on the origin of the word pylon (meaning a tower carrying electricity cables).  Keen pylon fans will already know that the original use of the word was to describe the gateway to an Egyptian temple, but the first use in the modern sense cited by the Oxford English Dictionary is in 1923 (pre-dating the building of the National Grid which began in 1928).

"A tall tower-like structure erected as a support for a cable, etc.; spec. (now the principal use) a lattice-work metal tower for carrying overhead electricity lines.
1923 E. SHANKS Richest Man iii. 52 Half a mile up the mountain, a cable, a thin black line, traversed the crystal air, borne up on pylons"

It is not clear how 'pylon' came to have this meaning but there is much interesting etymological discussion to had here for those keen to expand their pylon knowledge.  The Pylon Poets (see this previous Pylon of the Month post for further details) do get a mention in the OED as well and one contributor to the discussion wonders if they played a part in popularising the use of the word with a deliberately ironic reference to ancient monuments.  Fascinating stuff and if you ever meet anyone who thinks that pylons are boring, do enlighten them.