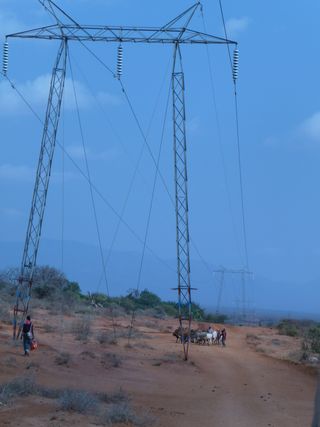 We start 2012 with a Kenyan pylon (not the first to be featured, see October 2009 for the first Kenyan pylon). The wind and rain are rattling against the window as I write this and so after a rather miserable start to the year on the weather front, I thought that a clear blue sky was just what was needed to raise spirits everywhere. Sadly, I haven't been to Kenya but fans of the website sent this pylon picture in after spending a few weeks out there in 2011. As the safari jeeps drove slowly through the bush with everyone keeping a keen eye out for wildlife, a shout of "STOP" caught everybody's attention. Was it a lion, a cheetah or an elephant? No, it was this rather spendid pylon and so a photograph was taken and 'Pylon of the Month' was explained to some rather bemused fellow travellers .  Those with an interest in electricity generation will be keen to know that 80% of electricity consumed in Kenya is produced by the state owned Kenya Electricity Generating Company (KenGen) and that they run fourteen hydropower plants, three thermal power plants, two geothermal power plants and one wind farm.

If a Kenyan pylon on its own isn't enough to get 2012 off to a flying start, pylon fans with an interest in art will be delighted to know that there is an exhibition this month in London (Camden to be more precise) of paintings by Joe Simpson.  The exhibition is called "Everything is Electrified" and it runs from January 20th-30th.  The  website has this to say about the paintings:

In a departure from his normal figurative paintings, Joe created the pieces with a range of media – including oil paint, marker pens, acrylic paint, ball-point pens and crayons.

Which all sounds very promising and one of the pictures is here to whet your appetite.

That's all for this month, but keep coming back during 2012 as there are lots of great pictures in the pipeline.