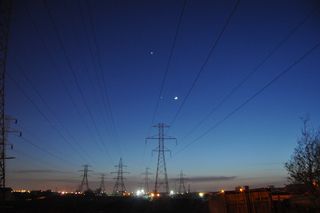 I have a backlog of pylon pictures sent in by fans from all over the world.  I try to mix them up with pylon pictures from the UK so that the blog doesn't lose touch with its roots, but as soon as this image arrived in my inbox I knew it had to be the June 2012 pylon. Why? Because the three bright dots in the sky above the pylon are the moon, Saturn and Jupiter.  This month sees the last transit of Venus until December 2117 and so an astronomical themed pylon seemed very appropriate.  I think (not knowing exactly when the photo was taken) that Venus is the lower of the two planets (pretty much alongside the moon) and it really is worth clicking on the image to enlarge it and see it in all its glory.  For more on the transit (and if you are a keen follower of astronomy you have probably had enough by now) then this Cocktail Party Physics blog post is a good place to start.  I got up at sunrise (0450ish) on the 6th June and the clouds cleared at about 0530 and so I saw the last 20 minutes which was made the early start well worth it.

But now to more pylon focused matters.  This month's picture was taken in Ballyfermot, a suburb of Dublin. If you look carefully you will see that some of the arms of the pylon don't have wires attached because they were still under construction as the photo was taken.  I'm not sure what the pylons are being built for, but it gives me an opportunity to talk about the plans to link up the Irish and British electricity grids.  Britain is an importer of electricity from numerous sources. One of these sources is Northern Ireland via the Moyle Interconnector, although that was broken last year and is still not up and running again as far as I can see.  There are also links to the Netherlands and France and if you have an ipad or ipod you can see live data via this app about where the electricity is being generated at any given moment.  But the new link under construction is to run from Rush North Beach in County Dublin to Barkby Beach in North Wales and is known as the East-West interconnector.  For the benefits of the project as seen by the company building it, look here.  Interestingly, the Guardian last year had an article about the possibility of wind farms on the West coast of Ireland being linked to the UK by another interconnector but given the impact of large numbers of wind turbines on the beatiful coast of Dingle and Kerry, whether this project goes any further is very much open to debate.

So from astronomy to the West coast of Ireland via the UK's imported electricity supply. Another month where Pylon of the Month provides information on subjects that you probably had no idea could be linked together.  Come back next month for more!

A very late reply, but thanks for pointing out that Britain is the exporter rather than the importer.

Great photo!
Actually Britain exports electricity to Northern Ireland and will be doing so over the new East West Interconnector to the Republic of Ireland also. In the next few years it is unlikely that there will be many imports to Britain from NI or ROI but that may change in future.
Anyways, pedantry aside, cool photo!