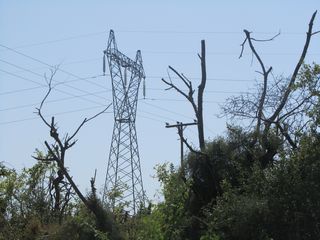 After a break for the month of August, Pylon of the Month returns for the new academic year.  This month's pylon is the blogging equivalent of the traditional "What I did on my Summer Holidays" essay that marks the return to school for so many pupils.  It is located on the Pelion peninsula in Greece where we spent two glorious weeks in July/August.  Lovely beaches, beautiful mountain scenery and a contrast between the calmer beaches of the Pagasitic Gulf and the more exposed outer part of the peninsula on the Aegean side.  If this sounds too good to be true then read this article from 2010.  We were staying in the rather lovely seaside town of Milina in Amelia's House, a property managed by Houses of Pelion.  If you find yourself in the area and fancy a bit of pylon spotting, this pylon is about 10-15 minutes outside Milina on the road to Arghalasti .
As we are in Greece, it is worth mentioning (again for regular readers) that 'pylon' is a Greek word for the monumental gateway of an Egyptian temple.  Wikipedia has this to say on the subject:
In ancient Egyptian theology, the pylon mirrored the hieroglyph for 'horizon' or akhet, which was a depiction of two hills "between which the sun rose and set." Consequently, it played a critical role in the symbolic architecture of a cult building which was associated with the place of recreation and rebirth. Pylons were often decorated with scenes emphasizing a king's authority since it was the public face of a cult building.
If travelling to Egypt is too far for you, then there is always the Grade II listed Patcham Pylon, built in 1928 as a symbolic gateway to Brighton in southern England.  So next time someone makes a disparaging comment about pylons in your earshot, do be sure to ask them whether they are talking about electricity pylons or Greek temples.  If you really want to go to town on pylon etymology then more details are in my last post about a Greek pylon in August 2011, but remember to wear your learning lightly and to point them at Pylon of the Month for more information.

Hello, I read your blogs regularly. Your humoristic style is witty, keep it up!

Yes I have seen the website, but thanks for taking the time to comment. The winning entry from the RIBA competition was the Pylon of the Month in November 2011