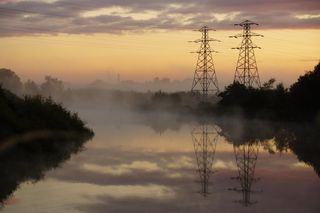 Sometimes, a month passes so quickly that I never get around to posting a new pylon.  As a result I often get e-mails reminding me to update the blog (really I do; you know who you are.....).  Looking back through the archives, however, I was shocked to see that there has never been a December pylon of the month and I was determined to put that right.  With recent fans offering me pylon pictures from the Grand Canyon, Maryland and other exotic locations, I was tempted to head abroad again, but instead I am returning to the roots of this website with an ordinary British pylon.  I'm also heading up North back to my roots because it is a picture taken looking out from the A50 near Warrington towards the North East and I lived in nearby Leigh for a short time and in the North Manchester area for all of my childhood.  The A50 runs from Warrington to Leicester and the most exciting thing that I could find out about it was that a section of it between Stoke and Derby was originaly meant to be a new motorway, the M64, but the project was cancelled in the 1976 and so no such motorway exists.  Warrington itself has quite a lot to offer if you are in the area.  It has been a crossing point on the River Mersey since ancient times (and the river features in the picture above) and was also the site of the last Royalist victory of the English civil war on the 13th August 1651.

The quality of the pictures on Pylon of the Month is quite variable, but this one is a real gem and well worth double clicking to appreciate in all its glory.  I'll use it as an excuse to link back to the most popular post on Pylon of the Month about Stephen Spender's poetry, because the Guardian article that described it was headlined "The gaunt, skeletal beauty of Pylons".  All over the world people seem to get set essays on Spender and his pylon poem and when you google 'Stephen Spender Pylon' out comes Pylon of the Month as the top hit. At least it did when I wrote this post and long may it continue.  Merry Christmas to pylon fans everywhere.

Greetings from Ohio! I'm bored to death at work so I decided to browse your site on my iphone during lunch break. I enjoy the information you provide here and can't wait to take a look when I get home. I'm amazed at how fast your blog loaded on my phone .. I'm not even using WIFI, just 3G .. Anyhow, fantastic site!

Electrical Transmission Lines are designed to hold up in adverse weather conditions, the transmission lines primarily use ACSR conductors.