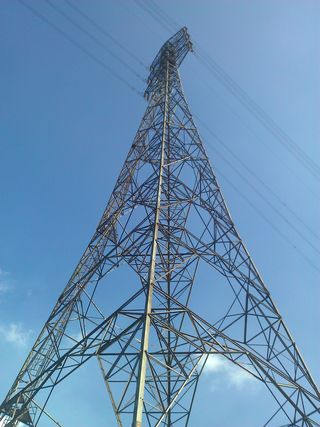 Happy New Year to Pylon of the Month fans everywhere.  After a busy festive season, January slipped away and so here is the first offering of 2013.  The picture was sent in by a fan of the website and I could hardly refuse to feature it when the email had this to say:

This tower's days are severely numbered, it is one of the Tees crossing towers and is due to be dismantled in the new year. It is over 120m tall and over 50 years old. The pair of crossing towers will be replaced by  even bigger versions, carrying a modern high performance conductor.

It looks to me as if this planning application is the one that deals with the replacement of the pylon over the River Tees, a river about which I knew nothing before writing this article.  As always, however, I learn something every day and so know I know that it rises in the North Pennines (near Cross Fell) and flows Eastwards for 85 miles to reach the North Sea between Hartlepool and Redcar.  The new crossing pylons will be 145m high and so according to this article they will be the tallest in the UK.  They are part of a £50 million pound project to upgrade and replace overhead power lines in the Middlesborough area which involves dismantling and replacing 14 pylons mainly between March and October 2013.  So if you are looking for bit more pylon action in your life this year then it looks as if Teeside is the place to be.

If you can't make it to the North East then you can at least keep up with the latest thinking on pylon design from the National Grid.  You might remember the competition that took place in 2011 which was won by the T pylon, but further design work has ben ongoing and it looks as if the 'Flying T' has won out.  Read all about it here, but remember that you read about it first on Pylon of the Month.

I was the foreman on the erection and dismantling of these towers.The base of the tower in the Sabic plant was also took down by us (Balfour Beatty) . The new towers where erected with a 1200 ton crane , the old ones with a 500 ton crane.we lost quite lot of time due to high winds . In the end the job got done safely , thanks to a good gang of men.

I work at Sabic's site at North Tees. The original towers were tall enough to safely allow the ships to pass underneath them and dock at the jetties.

However the issue came when the now much larger off shore platforms being built upstream were compleated. They were too tall to pass safely underneath them so the cables needed to be decommissioned and removed at the expense of the manufacturers.

So national grid decided to replace the existing towers with taller ones so that they no longer needed to drop the cables.

While a lot of the old towers leading up to the crossing were toppled. The few before were dismantled due to them being within the chemical complex.

In fact about the last 5m of the old tower next to the river on my side remains to this day. It sits overtop of a pipe trench, and so a large scaffolding frame was built around the base. With large thick padded matts placed over all the pipes.
This was in order to protect the pipes from possible falling objects during dismantling.

The scaffolding and matts are also still there around the base. I believe national grid would only demolish to that point, and are leaving it to Sabic to demolish the rest. Which there in no rush to do.

What I wonder is if they considered using the link line tunnels which go under the river instead of towers.