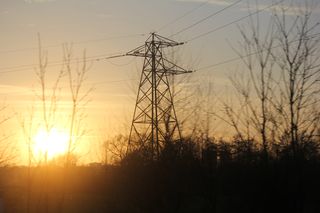 This month's pylon comes to you from the M5 motorway.  It follows in the fine tradition of pylon photos taken whilst travelling, with the earliest example (from July 2009) being this one on the M6 motorway.  The fan of the website who submitted this month's photo said:

This was photographed from the M5 whilst coming home on Friday evening.  I can't quite remember where it is but my best guess was somewhere between Gloucester and Birmingham.  I was actually trying some arty shots of the sunset, but the pylon sort of strayed into my shot.

So a serendipitous photo rather than a planned pylon photo shoot, but Pylon of the Month is more than happy to accept any submissions whether deliberate or accidental. As the M5 has cropped up I feel that a bit more information is called for and I'll start with some construction history.  It is a rather messy story, but it starts in 1962 with the construction of a two lane motorway in Worcestshire and in the same year a section near Filton in Bristol was also opened.  This latter section of the M5 began addressing the traffic problems in Bristol dating back to the 1930s.  More details of the construction history and a rather splendid photograph of the first cars (led by the Lord Mayor of Bristol in his Daimler) precessing down the new Bristol section of the motorway via flickr and brizzle born and bred.

In other pylon news this month, the bad weather in Scotland led to sheets of snow and ice damaging eight pylons in Argyll as reported by the BBC and many areas were without electricity for days.  Even if you aren't the biggest fan of pylons, you miss them if they meet the fate of the one below and your electricity supply is cut off as a result! 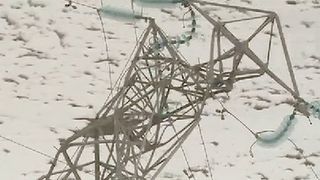 There is plenty more that I could report but I'll leave it there this month.  You can after all get too much of a good thing, or as the saying (via Mary Poppins) goes in our house "enough is as good as a feast".  If you want to hear Mary Poppins say it herself then you can hear all four seconds of it here.