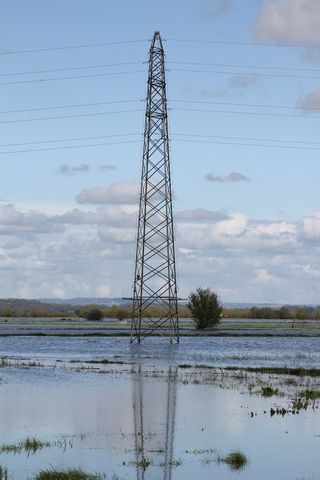 This month's pylon comes from a fan of the website in Somerset and was taken almost exactly a year ago during the floods that affected Somerset in May 2012.  As the summer has started with much better weather so far (at least in Oxfordshire where I'm based) it seemed a good time to remind pylon followers of just how grim the summer was last year. The photograph was taken on Aller Moor and doing a bit of research led to my finding out quite a lot of new information about Somerset.  For a start, I had heard of the term the 'Somerset Levels' but had no idea what it meant.  I now know (courtesy of Wikipedia) that the more correct term is the 'Somerset Levels and Moors' and that the name Somerset may derive from the fact that in prehistory winter flooding meant that the area was only visited in summer. Hence Sumorsaete, meaning land of the summer people.  The 'levels' refers to the flat clay based areas near the coast with the moors being inland flood plains, as this month's pylon very clearly shows.  As a result, they are one of the most important inland wetland landscapes in Britain or even (according to the Visit Somerset website) in the world.   It is hard to credit that I have driven through the area on the M5 many times (most recently en route to Cornwall this Easter) and never realised that it is an area of such biodiversity and ecological importance.  There is even an ongoing attempt to reintroduce Cranes to the area and according to the Great Crane Project
Cranes are wonderful, iconic birds that are sadly missing from many of their former wetland haunts in the UK.  They were lost as a breeding bird around 400 years ago as a result of the draining of their wetland nesting sites, and hunting for food.
It is also tremendously important archeologically because the peaty soils are good for preserving ancient settlements.  So if you are in the area, once you have ticked off this month's pylon from your 'must see' list you there is no shortage of other things to do and places to visit.
It would be remiss of me not to finish by mentioning that pylons are very much in the news in this part of the country.  The proposed pylon line to carry electricity from the new nuclear power station due to be built at Hinckley Point will have 50m tall pylons which will have a significant impact upon the landscape, not least because they are twice as tall as the current towers.   Local MPs are campaigning to have the tranmission lines buried underground, but given the costs of this I fear they are likely to be disappointed. Having said that, a five mile stretch in the Mendips has been earmarked for possible burial, so watch this space for updates during the rest of 2013 and beyond.