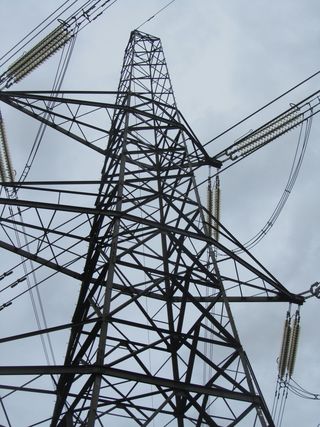 This month's pylon comes from Kennington just outside Oxford and for reasons that will become obvious, I took it myself very recently.  It is very easy to find, being a few hundred metres from Sandford Lock on the Thames on the Sustrans cycle path from Abingdon to Oxford.  But the main reason I chose this pylon is because I could get a close up of something attached to the wires just before cables join the tower. Once you have seen the in the picture below, you will see them everywhere, but unless you are a real pylon spotter you have probably never noticed them before. 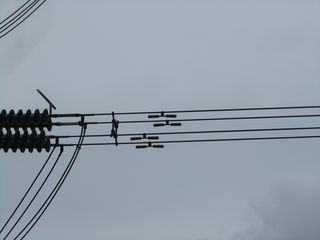 The objects in question are the dumbell shaped objects and they are known as Stockbridge dampers or dog bone dampers because of their shape.  They perform a vital role in preventing damage to the cables and in order to explain how they work, it is time for a little bit of theory.  Some readers of the blog might know that I am a Physics teacher, but I will try to stop myself from getting too carried away.  I'll also try to get the physics right without over complicating or over simplyfying things, which might not be as easy as it sounds.

The basic problem is that wind blowing on the cables can make them vibrate, or more specifically vortex shedding on the leeward side leads to this undesirable effect.  It can do this in a number of ways, but one of the modes of oscillation is called Aeolion vibration or flutter.  The vibration has an amplitude of a few millimetres to a few centimetres (this is how far the cable moves up and down) and a frequency of anywhere between 3 - 150 Hertz (vibrations per second).  This kind of effect, where some a driving force (in this case the wind) causes something to vibrate at its natural frequency is very common.  If you have ever seen or heard a washing maching as the drum speeds up in the spin cycle, you might have noticed that there is at least one particular speed where the washing machine shakes violently.  The problems with the Millenium Bridge in London when it wobbled as people walked across it just after opening were also a variation on this theme. But the most dramatic example involving the wind is probably the collapse of the Tacoma Narrows Bridge and if you haven't seen a video of the wind induced oscillations, now would be a good time to tick that off your 'things to do before you die' list.  But back to pylons, because as you will know if you have ever bent a paperclip a few times, repeated stress can lead lead to the metal failing and in the case of pylons on a windy day (or more likely the cumulative effect of many windy days) this could lead to strands of the overhead power lines breaking.

So how do Stockbridge dampers help?  In very simple terms, instead of the wire vibrating the masses on the end of the damper vibrate instead and so the cable vibrations are 'damped' or reduced in amplitude. The idea was invented by George H. Stockbridge in the 1920s and originally consisted of two small blocks of concrete on the end of a piece of metal wire.

The original US patent is an interesting read if you want to know more, but in the words of the inventor:

My invention relates to means for preventing objectionable vibration in suspended cables, such as are used in electrical transmission lines and the like.....

The wikipedia page on Stockbridge dampers also has more information, but there is much that I would like to find out about how they are used.  In particular, are all dampers the same or do they vary depending upon the specification of the cable?  If you work for National Grid and know the answer please do get in touch and if you had a real life Stockbridge damper that I could use when teaching about resonance in my Physics lessons, I would be extremely grateful.

If this was all a bit too much information for the casual visitor to the website just looking for a new pylon picture then I can only apologise.  I hope that you can at least spot a few Stockbridge dampers on your pylon travels and if nothing else, it might make you realise that there is more to pylons than meets the eye.

Thanks for the tip. We've been looking at bridges on our travels this summer, but no luck yet on non-pylon Stockbridge dampers. We'll keep looking!!

Stockbridge dampers are also found on the vertical cables of suspension bridges.

I've often noticed those. You've got me worried now!