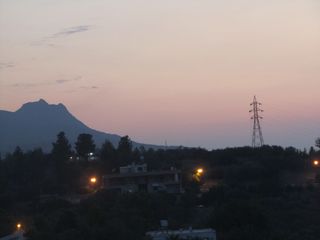 It's that time of year again when I have to select the best pylon picture from my holiday snaps.  In some previous years, this hasn't been difficult because I only took one photo but this year my cup runneth over.  I could have gone for the close up with the sea in the background, or the wider angle shot with Kyrenia in the background but in the end I opted for the artistic twilight shot you see above.  It was taken from the Kybele restaurant in the grounds of Bellapais abbey in Northern Cyprus.  If you are looking for a restaurant with as view, then this is the place for you.  The views down from the Abbey towards Kyrenia/Girne are amazing and I really do recommend the Turkish Republic of Northern Cyprus (TRNC) as a holiday destnation.

The island of Cyprus is not without its problems and the TRNC issue is still a contentious one that I don't intend to go into here.  The TRNC wikipedia page is as good a place as anywhere to start looking into the issue:

Northern Cyprus.......is a self declared state that comprises the northeastern part of the island of Cyprus. Recognised only by Turkey, Northern Cyprus is considered by the international community as occupied territory of the Republic of Cyprus.

The village of Bellapais itself has a literary pedigree, courtesy of Lawrence Durrell who lived from 1953-56 and it is where he wrote Bitter Lemons, which Bookslut says:

Might be his best "spirit of place" book. The tension between his love of the island and its genus loci (Aphrodite, Othello, waves of picaresque invaders of which the British are only the most recent) and the seemingly hopeless political problems he encounters there make for a sweet and sour masterpiece.

If you go to Bellapas to look at Durrell's house (there is a plaque), then after the steep climb up from the centre of the village treat yourself to a drink at the fabulous Gardens of Ireni which is just around the corner.  The Brandy sours are highly recommended, as mixed by the wonderful Deidre who has lived there on and off since the 1950s and remembers Durrell from parties that her parents held.

On a rather more prosaic note, power has recently been in the news in the TRNC, with electricity being transferred from Turkey to try and reduce the cost on the island where it is about twice the cost of the Turkish mainland.  The biggest power station (120MW) on the island is oil fired and a recent oil spill near Famagusta has also attracted lots of bad publicity.

Rather than finishing on that downbeat note, I'll leave you with this amusing video from Pagan Mo which I found on a Swedish website that recently mentioned Pylon of the Month and sent a bit of traffic my way.