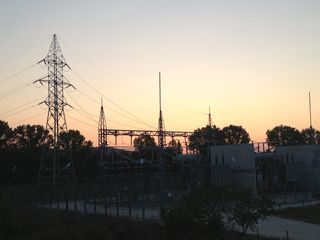 After a break for the start of the academic year in September, Pylon of the Month is back with the first of the autumn international pylons.  This month, we in Bulgaria for the first time with another pylon sent in by a fan of the website.  For those who have visiting all the pylons of the month on a "things to do before I die" list, to tick this one off you need to go about 30km south of Bourgas on the Black sea.  You can get more details here via Google maps for when you start to plan the road trip. If you need a bit more information then according to Wikipedia you will be glad to know that:

Burgàs or Bourgàs (Bulgarian: Бургас, pronounced [burˈɡas]) is the second-largest city on the Bulgarian Black Sea Coast and the fourth-largest in Bulgaria after Sofia, Plovdiv and Varna, with a population of 200,271, according to the 2011 census. It's the capital of Burgas Province and an important industrial, transport, cultural and tourist centre.

It also has Lake Burgas (Bulgaria's largest lake) which looks a good bet for a spot of birdwatching.

Electricity is quite a hot topic in Bulgaria at the moment with electricity prices being cut for the second time in July this year, much to the displeasure of the utility company and to the disappointment of many analysts.  Accoring to Reuters 'Electricity prices are politically sensitive in the Balkan country since power bills bite off a big chunk of monthly incomes, especially during the winter'.  Perhaps if Ed Milliband ever reads Pylon of the Month he can look at what is happening in Bulgaria as he looks to implement a fuel price freeze if he is elected in 2015.

I'm on a bit of a Bulgarian energy roll now and was surprised to discover that 40% of Bulgaria's power comes from nuclear power stations, largely because it is not particularly well endowed with coal, oil or gas.  As a result of its nuclear power stations, it is an exporter of electricity and again according to wikipedia 'plays an important role for the energy balance in the Balkans'.

If all this isn't enough, I can also point you towards an electricity pylon factory which is for sale in Bulgaria.  If you decide to buy it for 2,660,00 Euros do let me know how you get on.

Love this pylon Yana! Just to say hello and hope to perhaps see a Morillon edition at some point :)

When are we getting November's pylon of the month?