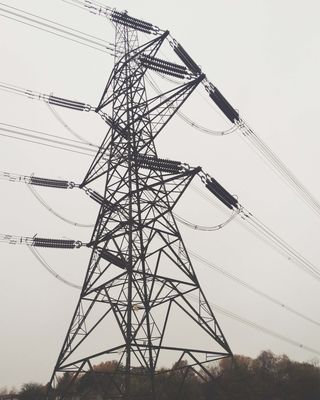 I get quite a few emails with photographs from pylon fans and this month I have gone for a Welsh pylon which was submitted with the subject of the email as "Pylon: Field, Rudry, Wales."  The main body of the email also suggested a tendency towards taciturnity with just the one word; "Enjoy", which I did, hence its selection as April's Pylon of the Month.  Wikipedia tells me that Rudry is "a small village and community located to the east of Caerphilly in Wales" with the claim to fame that Oliver Cromwell is thought to have taken shelter in the church.  Pylon fans thinking of heading to Wales to chase this one down will be relieved to know that there is a pub in the village, the Maenllwyd Inn, at which they can seek refreshment, perhaps after enjoying a stroll around the 28 mile long circular Rhymney Valley Ridgeway Walk.  I'm pretty sure that Caerphilly cheese will be available in the area and so if you do the walk, pack some in your lunch box to make your day out even more special.

Also submitted with the picture above was a shot from directly below the pylon which is shown below and which I find to rather pleasing in its symmetry and unusual perspective. 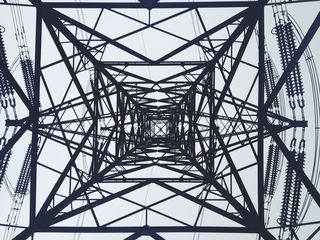 There was a little outbreak of such shots recently on Twitter and if you hanker after more pylon action than the rather meagre ration of one a month (at best) here, then you really should be following @pylonofthemonth.  There aren't too many days when pylon pictures aren't tweeted from somewhere in the world, rather confirming their striking visual impact even if it isn't one that people would necessarily choose to be struck by.  Whilst I'm on the subject of visual impact, it was on twitter that I struck up a conversation that led me to the Netherlands based Noise2Signal website with a fascinating and provocative comparison of pylons and windmills:

When you get right down to it, windmills are not intrinsically scenic.......they’re really industrial equipment, power-generating and water-moving engines, as inherently romantic as an oil derrick or an electricity pylon.

Then looking into the future:

Indeed, in a few centuries we may be collecting old mismatched electric pylons from all over the country and setting them up in little parks.  Enthusiasts will clean them and care for them, climbing to the tops in almost-correct period harnesses.  Perhaps they’ll string dead wires among them so that school parties can picture the old days of the electric grid.  Gaggles of tourists will take group shots around their bases before heading off in search of ice cream.

If that doesn't get you thinking then nothing will, particularly if you read the comments and the discussion at the bottom of the Noise2Signal article. Tune in next month for more pylon related discussion.