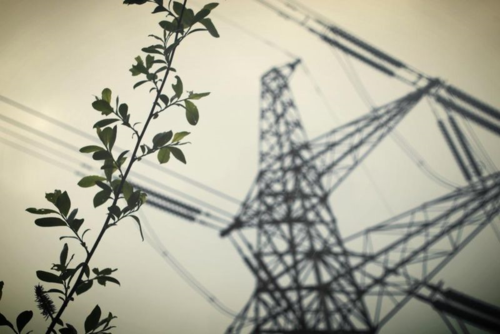 This post has beeen a long time coming as the end of the school year left me short of time and so for all you pylon fans out there wondering where June's pylon went, I can only apologise.  I hope that this rather splendid artistic shot will make up for it.  As with so many pylons that appear here, it was submitted by a fan of the website who had this to say:

This pylon is located at the foot of Eston Hills in Middlesbrough, in the shadow of a ridge around 200 metres about sea level.  The Eston Hills were used as a lookout to warn of attacks during the Napoleonic era and remains of the warning beacon can still be found at the escarpment of Eston Nab. Ironstone was discovered in the hills during the 19th century and this helped transform Eston from a tiny village to a thriving mining community and eventually cemented Teesside as the Iron and Steel capital of the world.

It seems that public access to the Eston Hills was under threat until recently when a public appeal by the Friends of Eston Hills raised £15,000 to buy Eston Nab.  In 1870-72, John Marius Wilson's Imperial Gazetteer of England and Wales described Eston Nab like this;

EASTON-NAB, an eminence in N. R. Yorkshire; on Barnaby-Moor, near Guisbrough. It has a height of 784 feet; and is crowned with a beacon, a square tower with turret, which commands one of the grandest prospects in England.

For those of you who like your pylon pictures without the soft focus effect, this month's correspondent very thoughtfully supplied this picture as well (and as always clicking on the picture will give you the full size version).

Even more thoughtfully for those of you on a mission to tick off all the pylons that have featured on Pylon of the Month here is a Google maps picture of the location to help you out. As the sender of this month's pcture added at the end of his email:

I think the expanse of Pylons across the hills in contrast to the aforementioned historic remnants are a reminder of the constant evolution and progress of the area. They strike imposing figures across the countryside and show the effect of technological change on our landscape.

before segueing into Stephen Spender's famous pylon poem, which has featured here before and still remains one of the most popular pages on Pylon of the Month.  It all reminds me of this Noise2signal post comparing pylons to windmills in the Dutch landscape which I've mentioned before.  Next month it will be time for the annual 'holiday pylon', this year from Greece so keep coming back for your monthly pylon fix.