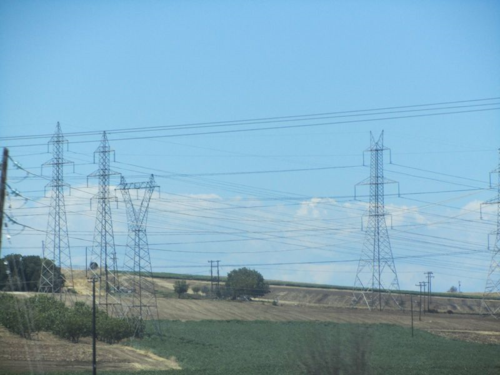 It's that time of year again when I use a pylon picture taken on my summer holidays.  I've been doing it for a few years now and after a Greek pylon two years ago from the Pelion area of the mainland, this year's isn't too far away in geographical terms.  We spent two wonderful weeks on the island of Skopelos, but despite exploring most of the island, there wasn't a proper pylon to be seen and so it wasn't looking good for the 2014 holiday pylon.  I'm not counting the smaller wooden structures that are fairly common on Skopelos (as they are everywhere), although that didn't stop me using a painting of one in January ths year because it is the first time a pylon appeared in a work of art.

The fact that Skopelos is one of the more unspoilt islands was one of its attractions and so I'm not complaining.  After two weeks, we got the boat from Skopelos to Volos and from there to Thessaloniki by bus and it was on this leg of the return journey that I snapped the pylons.  What I like about is that there are 3 different designs of pylon in one picture and my favourite is the one on the right with two triangular features on top that look rather like ears.  I'm guessing that they belog to the Public Power Corporation who seeem to provide most of the electricity in Greece according to the "List of electric power companies in Greece".  If you want to track the pylons down then they are on the main road from Volos to Thessaloniki just before the turn off to Larissa.  If you are going to Thessaloniki they are on the opposite side of the road (so on the left as you should be driving on the rght).

On a related point, is there anyone out there who falls in the middle of the Venn diagram below? 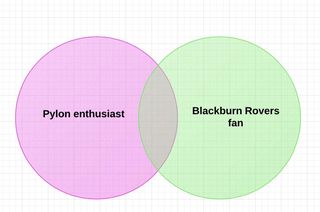 If so then you may well remember 2007, when Blackburn Rovers (club motto 'Arte et Labore' or  'By Skill and Hard Work') played Larissa in the UEFA cup and despite winning 2-1 at Ewood Park went out 3-2 on aggregate. For complete statto heaven on both legs of the fixture, the UEFA web page is about as comprehensive as it is possible to be.

That's all for now.  See you in September for more pylon related fun and facts.