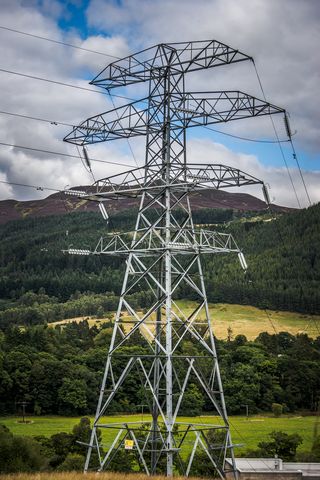 This month's post is the 50th pylon to feature on Pylon of the Month since it began back in June 2008 (at least for me; there was a website of the same name that insipred me as detailed in the 'About' section of the blog).

With the Scottish Indepedence referendum due to take place later this month I was thinking of featuring a pylon from North of the border (another first for Pylon of the Month), but didn't have any pictures available.  Then, most serendipitously, a fan of the website sent me a picture from close to the A9 near Pitlochry (you can see the original here).  It is the first pylon out of the 15MW hydroelectric plant on the artificially created Loch Faskally.  If you want to visit the pylon then you can see it on Google maps here.  According to the the Highlands and Islands Energy website:

Hydro power produces about 12% of Scotland’s electricity, with considerable potential remaining to introduce new hydro schemes and expand or improve the efficiency of existing facilities.  More than half of Scotland’s 145 hydroelectric schemes are in the Highlands and Islands area, with the most modern plants achieving energy conversion rates topping 90%.  Total hydro generation capacity in Scotland is about 1,500 megawatts (MW), a figure that was overtaken by the country’s faster-growing windpower capacity in 2009.

I don't think that any of this has a direct bearing on the Scottish referendum, although energy is a significant part of the debate as outlined on the BBC website where you can read into the issue in great detail.  However you vote (if you are eligible), you can at least enjoy this month's pylon and as it is from a hydroelectric power station you can even enjoy it with a clean (or perhaps that should be a green......) conscience.