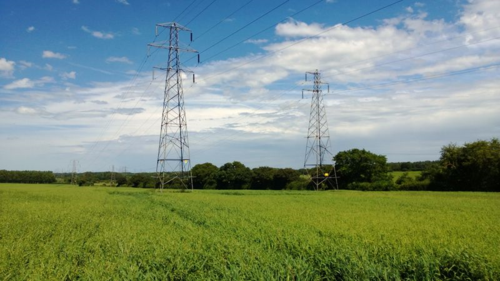 Another month has passed me by and I'm posting this pylon in the last few days of November so that it is there for the whole of December.  I had good intentions on my return from Japan (see October's pylon) but time slipped through my fingers and so once again it is a case of better late than never. Whilst looking through the many emails I receive with potential pylon pictures to choose from, it was this phrase that was the clincher:

Keep up the good work, it's a great tongue in cheek website blog and keeps us amused on not so summery days.

As the last few weeks have been full of not so summery days, it seemed to me that a reminder of the glory days of June was in order and so do please click on the image above to get the larger version and drink in the sunshine.  The pylons are located south of the A2, south of Canterbury in a Village called Nackington.  It looks like a lovely place to visit and Kent is one of the counties of England which I have rarely visited, so I might try to get there at some point soon. Nackington itself was in the Domesday Book and given the history associated with Canterbury it might not surprise you to know that the A2 follows a route similar to a Celtic ancient trackway and that it was formerly known as the Dover Road.  When following this up, the wonders of the internet then led me to a comedy play by AA Milne (of Winnie the Pooh fame) called 'The Dover Road' which was written in 1921.  If you are reading this post and you are a person of influence in the theatre world and decide to revive this play, please do name check Pylon of the Month and invite me to the first night and the after show party.  If it then leads to a triumphant remake of the film (originally released as 'Where Sinners Meet') then an invitation to the Oscar party is the least I expect.

Talking of films, I'll end with a link to a quirky short film sent in by a fan of the website shot on super 8 film.