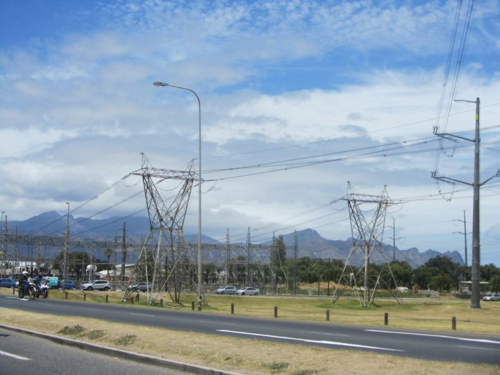 This month's pylon(s) comes from South Africa and is yet another another addition to the 'pylon pictures taken out of the window of a moving vehicle' category.  I took it in December whilst on a family holiday in South Africa and the pylons can be found near Stellenbosch, just after you join the N2 to head East on the fabulous Garden Route.

A bit of research tells me that South Africa currently relies heavily on coal for energy production (88% according to a graphic in the Observer's January Tech Monthly, but 77% according to Wikipedia) largely because there is a lot of coal in the norh of the country.  It also revealed that in June 2014 Johannesburg suffered power disruption due to:

......the theft of 88kV electricity pylons between the Nirvana and Nancefield substations.  City Power electricians are currently in the areas and have started the project to replace the stolen pylons and also to repair those that can be replaced....

I had to follow up this story, but my visions of whole pylons being carted away on the back of a truck were dashed when I read that:

cross members of pylons were stolen, causing the bolts to loosen at the base of a pylon, resulting in the collapse of one of them.  The next pylon on the circuit also collapsed as a result of the strain.

I'll sign off there for now, but with plenty of pictures lined up for 2015, make sure that you come back regularly for more pylon action.