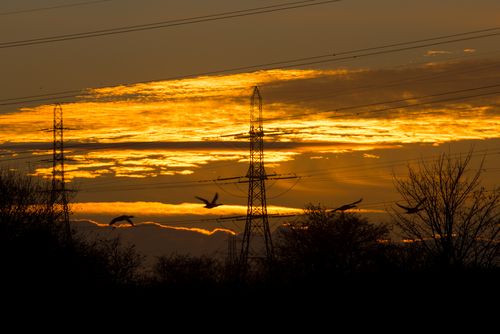 I've received a lot of pylon pictures over the last few weeks and choosing between them was causing me a bit of trouble.  I therefore decided to experiment with a bit of democracy and let one of my year 10 physics classes choose.  From a shortlist of six pylons, they chose the one above, although it wasn't unanimous and today in the lesson there was a bit of grumbling from a disgruntled student who is convinced that the wrong choice was made.  Anyway, it was the colour of the sky and the birds in flight that captured the popular vote and the fan who sent in the picture had this to say about it:

I've become a fan of your site via a colleague [who is] currently the recipient of the award for March. I have quite a lot of pylons, basically because where I live (Preston) there is only really one decent spot to photograph the sunset which is from near the docks, on the Ribble, and across the water in Penwortham is a substation at Howick Cross. The pylons carry the electricity over the river and either spoil the view or enhance it. Personally I like it as they give a focus to what would otherwise be a fairly mundane view as there are no other real landmarks in the direction of the sun.
The North West of England seems to be a hotbed of pylon fans and this is one of a number from that part of the world.  As regular readers of this blog might know, that is the part of the world where I grew up and although I have only been to Preston a few times I do remember the famous/infamous (delete according to your taste in architectural styles) Brutalist bus station built in the late 1960s and since 2013, a grade 2 listed building.  As far as I am aware there aren't any listed electricity pylons, but the 'Patcham Pylon' near Brighton is grade 2 listed.  This has nothing to do with electricity, but harks back to the original use of the word pylon to describe the monumental entrance to a Greek temple.  I could go on (and have done so before, here in September 2012 and August 2011 where the etymology of the word 'pylon' was discussed).  That's all for now folks.  Come back next month for more or follow @pylonofthemonth for a more regular supply of pylon pictures.

Hi - yes you can email me via the blog. Go to the 'About' page via he link on the right of the page and there is an 'email me' button.

hi, so sorry that i have to write it here. i would like to ask you a question on a pylon found in china that does over water (pond/sea). i have an instagram photo and i am looking at this location and is hoping that you will know. can i send you an email or something?