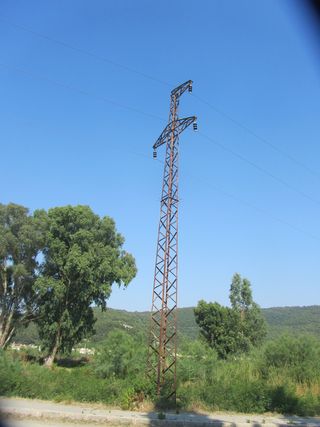 As promised last month, here is the annual 'what I did on my holidays' pylon.  It was taken in Turkey near to Selcuk and I could have chosen bigger and better pylons, but this one caught my eye as we waited for a bus back from Pamucak beach, a few miles outside town.  It is probably the most unassuming pylon ever to have featured on Pylon of the Month, but it just goes to show that even small rusty pylons can get their moment in the sun.  I also like the fact that it is asymmetric and as I mentioned back in May 2012, it is this kind of pylon that may well have led Alain de Botton to describe pylons thus:

In different species, I noted varieties of modesty or arrogance, honesty or shiftiness, and in one 150-kilovolt type in ubiquitous use in southern Finland I even detected a coquettish sexuality in the way the central mast held out a delicate hand to its conductor wire

Selcuk is well known because of its proximity to the amazing ancient Roman city of Ephesus.  It really is a wonderful place and if you head out to tick off this month's pylon, then do make sure Ephesus is also on your itinerary!   You can also go and see the site of one of the seven wonders of the ancient world, the Temple of Artemis, although you need a vivid imagination to really enjoy it.  It was our second visit to Selcuk (the last visit featured in August 2009) and as most people only go to Ephesus, the nearby town remains relatively unspoilt and a really lovely place to stay.  Contact Alison for advice and stay in one of the great houses that she looks after and you won't regret it.