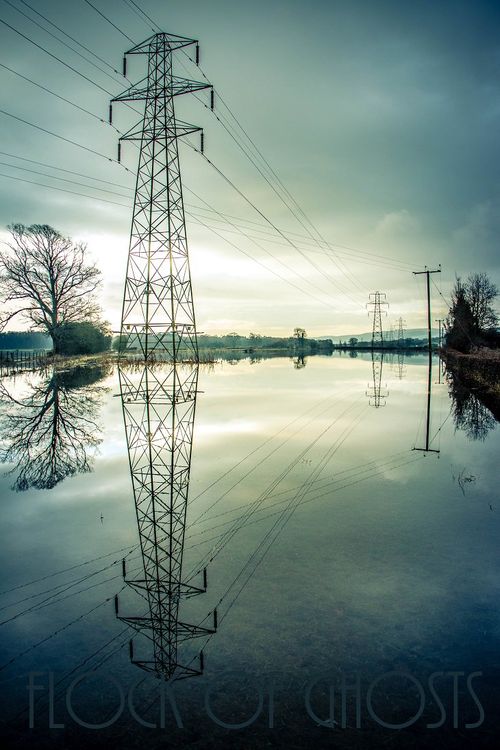 November slipped by without a pylon and not wanting pylon fans to end the year on a downer with another blank month, I was looking through the numerous pylon pictures sent in by fans, but struggling to find one that was right for December.  Then on Twitter as @pylonofthemonth, I was alerted to the wonderful picture above of a Cumbrian pylon.

Making this Pylon of the Month seemed to be the least I could do given the troubles being caused in Cumbria by the weather, although I guess that having a Cumbrian pylon feature on my blog isn't going to make too much of a difference to life under such difficult circumstances.  The picture was taken by @Gardener_John and you can find more his fantastic pictures here.  Despite growing up in the North West and spending many weeks of my life in the Lake District, I must confess that I had never heard of Levens or Lindale.  Levens has a population of 1007 and the rather magnificent looking Levens Hall with its celebrated topiary garden.  Lindale, on the North-East shore of Morecambe Bay sounds just as interesting because of a famous former resident:

Lindale's most famous resident was John "Iron-Mad" Wilkinson, an ironworker and inventor who lived in the village from 1750, where he owned the Castle Head estate. He produced the iron for and helped design the world's first iron bridge (at Ironbridge and Broseley) and he made the world's first iron boat in 1787. A large iron obelisk stands in the village as memorial to him.

The village's full name of Lindale in Cartmel gives a clue that a road trip to this part of the world is well worth a day or more of your life.  Once you have done a bit of exploring, nearby Cartmel is a foodie destination with Trip Advisor having a guide to the 'The 10 Best Cartmel Restaurants'.  L'Enclume is the most famous and in 2014 was, according to the Good Food Guide, the best restaurant in the UK. So a bit of pylon spotting might be the main aim of your trip, but there are other attractions as well........!  That is what I love about writing Pylon of the Month; I always end up better informed than before I started writing a post.  I hope you are too as well if you have read this far.