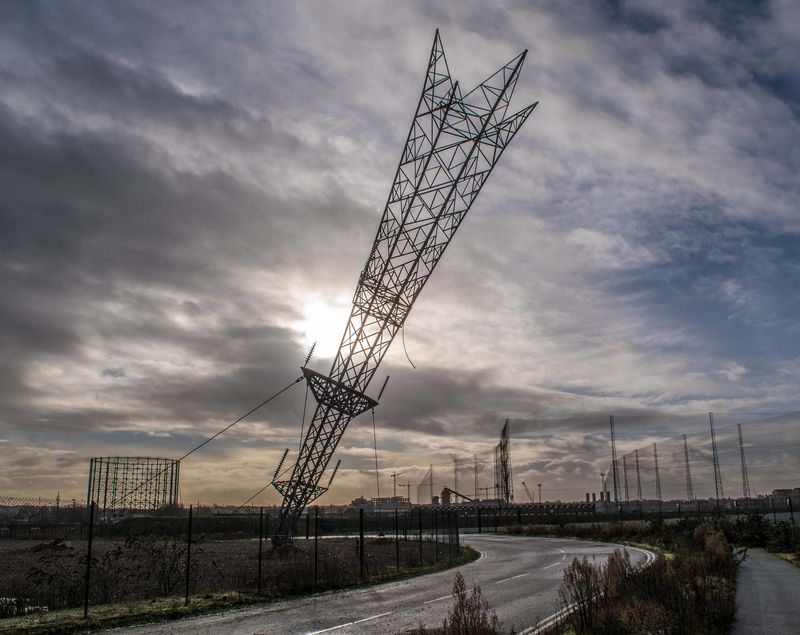 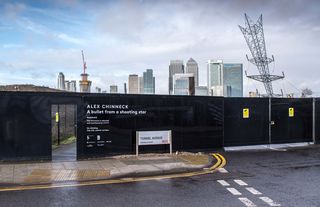 Most of the time, Pylon of the Month is a celebration of the ordinary pylons that surround us and it is their quotidian nature that makes them so charming (at least in my eyes).  Every now and then, however, an extraordinary pylon captures my imagination and so for the New Year I bring you 'A Bullet from a Shooting Star' by sculptor Alex Chinneck. According to TimeOut London:

This massive steel sculpture was commissioned by the London Design Festival in collaboration with Greenwich Peninsula, and references the industrial history of the site it will be poking out of. British sculptor Alex Chinneck's 35-metre tall inverted electricity pylon weighs 15 tons, and will be visible from North Greenwich station, the Thames Clipper, the Emirates Airline cable car, Canary Wharf and planes flying to and from City Airport. By night it will be illuminated, becoming a beacon and projecting a lattice of shadows onto the ground below.

I've been aware of the sculpture for some time now and have retweeted images of it as @pylonofthemonth, but I never use images from the internet here, instead relying on either my own pictures or those sent in by fellow pylon enthusiasts.  So this month, pylon fans everywhere have reason to be grateful to Nabil Jacob who sent me these pictures.

Indeed, while the pylon may look weightless, balancing on nothing but a tiny tip of metal, the amount of engineering that has gone into the spectacle took almost a year of work. To keep the pylon upright, 100 tonnes of concrete have been poured into a 20ft deep hole. Chinneck and his team also had to make an entirely new and advanced design for a pylon, made from 400m of steel and weighing 15 tonnes.

I've got a backlog of less exotic pylons lined up for 2016 so keep coming back for more.  In the meantime, Happy New Year to pylon fans everywhere and I hope that the new design of the blog is to everyone's taste.  It is the first time I've changed things since I started back in 2008, so I can't be accused of rushing into it!