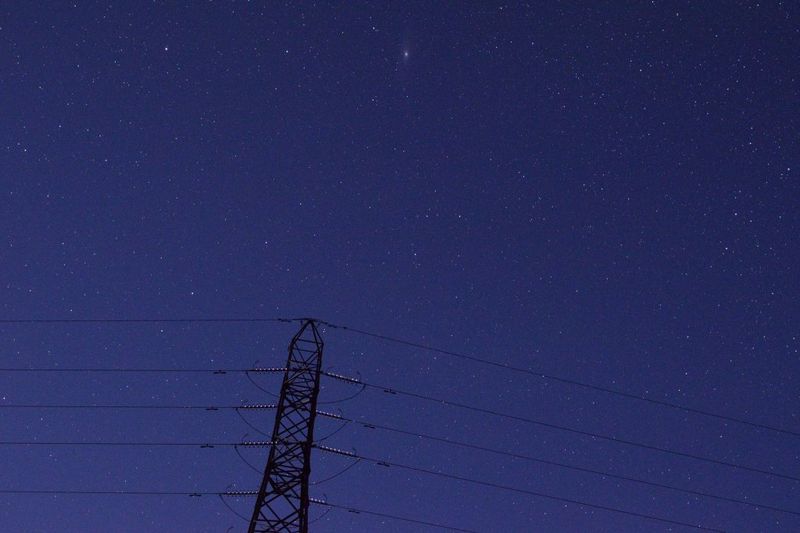 A long time ago in a galaxy far far away, some photons of light set out on a journey towards earth. They arrived recently and had the luck to be captured by @Skullet who posted a picture on twitter which caught my eye because of the pylon.  The galaxy concerned is Andromeda and you can see it near the top of the picture above the pylon as a smudge of light.  It's 2.5 million light years from earth which means that the photons of light were traveling through space for 2.5 million years (at about 9500 billion kilometres per year, that is definitely far far away). Andromeda is a galaxy in our local group and because it is visible with the naked eye (if you are in a suitably dark place) it has been known about for a long time.   Wikipedia has this to say

The Persian astronomer Abd al-Rahman al-Sufi wrote a line about the chained constellation in his Book of Fixed Stars around 964, describing the Andromeda Galaxy as a "small cloud".  Star charts of that period labeled it as the Little Cloud.[19] The first description of the Andromeda Galaxy based on telescopic observation was given by German astronomer Simon Marius on December 15, 1612.  Charles Messier catalogued Andromeda as object M31 in 1764 and incorrectly credited Marius as the discoverer despite it being visible to the naked eye. In 1785, the astronomer William Herschel noted a faint reddish hue in the core region of M31. He believed M31 to be the nearest of all the "great nebulae" and based on the color and magnitude of the nebula, he incorrectly guessed that it is no more than 2,000 times the distance of Sirius.  In 1850 William Parsons, 3rd Earl of Rosse, saw and made the first drawing of Andromeda's spiral structure.

Back down to earth, the pylon itself is near Crianlarich in Scotland.  Pylon fans interested in visiting the area will be delighted to know that there is plenty to do in the local area, especially if hill walking is your thing.  The last time I was there was about 26 years ago when walking the West Highland Way (with a quick diversion up Ben More on the shores of Loch Lomond) but perhaps this is the excuse I need to revisit the area! Pylons are actually quite a contentious issue in parts of Scotland at the moment with Dumfries and Galloway being especially concerned;  http://dumgalagainstpylons.org/.  As is often the case, it mainly comes down to whether or not one thinks that the additional cost of burying and then maintaining underground cables is justified when weighed against the impact of large pylons on the landscape. It is a problem that isn't going to go away because of the drive for more renewable energy. Getting the electricity from where it is generated to where it is needed means transmission lines and pylons are the cheapest way of doing this, at least if you are thinking only in financial terms.  The relative costs of the overground versus the underground option are much debated as this 2012 report shows and it is not a straightforward issue.

So there you go; it was already late February when this pylon was posted. I hope it was worth the wait and that you've learnt something if you've read this far.