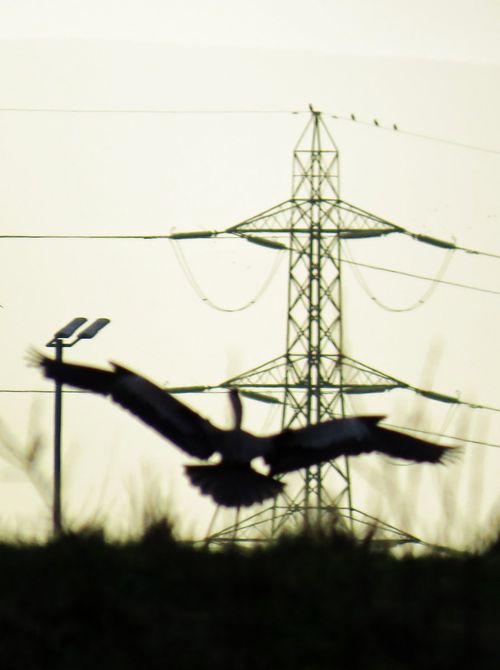 There has been a fair bit of pylon procrastination and a lot of busyness recently and so May's Pylon of the Month is the first since February. I've been as active as ever as @pylonofthemonth on Twitter, but at long last here is another post on the main website.

There are lots of striking pylon images on Twitter, but this one proved irresistible and comes courtesy of @jcurtisart.  With pylons providing ideal resting places for birds, the bird/pylon combination is actually quite common on Twitter.  The internet is also full of striking images and there is even a Birds on Electricity Pylons T shirt!  The bird in the picture above is a Heron and the picture was taken from the bank of King's Sedgemoor Drain on the path from Bawdrip not far from the M5.   The drain in King's Sedgemoor Drain was constructed between 1791-1795 and according to Wikipedia:

.....is an artificial drainage channel which diverts the River Cary along the southern flank of the Polden Hills to discharge into the River Parrat at Dunball near Bridgewater. As the name suggests, the channel is used to help drain the peat moors of King's Sedgemoor. There was opposition to drainage schemes from the local inhabitants, who feared that they would lose their common grazing rights. However, the main channel was constructed between 1791 and 1795, and despite some defects, brought some relief from flooding to the area.

King's Sedgemoor is part of the Somerset Levels which featured on Pylon of the Month back in May 2013.  There is quite a bit of detail about this beautiful part of the world in this earlier post, but the flooded pylon makes it clear that drainage in this part of the world remains very much a live issue.  Despite being a keen walker, I must confess to not having heard of the Polden Hills, overshadowed as they are by their bigger neighbours, The Mendips.  Next time I'm heading down the M5, perhaps I'll make time to stop over and explore the area.  A bit of pylon/bird spotting and a walk in the Polden Hills followed by a meal at the Knowle Inn in Bawdrip sounds like a pretty good way to spend  a day.  That's all for now and the normal monthly service will be resumed for the rest of the summer!