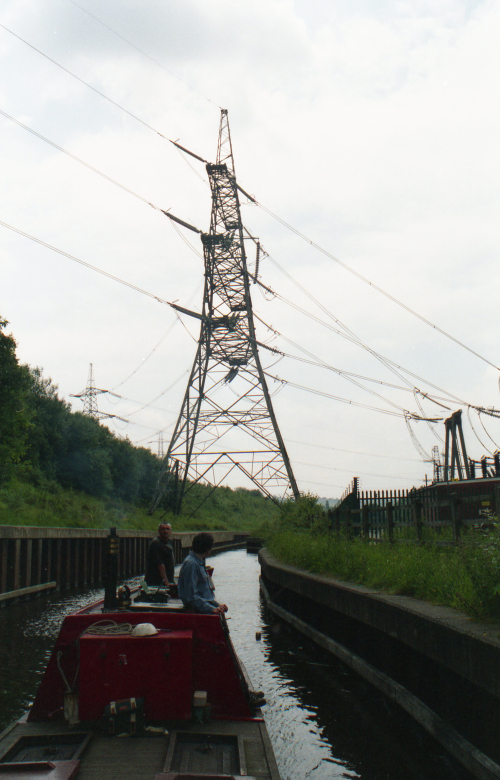 For the last few years, I've made August's Pylon of the Month one that I took on my holidays.  There were pylons aplenty in Slovenia and Croatia, but I either didn't get around to taking a picture, or if I did it wasn't good enough given the high quality of pictures sent in by pylon fans recently.  So the prize for August goes to a canal straddling pylon which arrived in an email with this message:

Thought you might like to see a picture that I took in June 2001 when  tripping up the Huddersfield Narrow Canal with an old 70 foot narrowboat of which I was then a part owner. The picture was taken near the site of the former Hartshead Power Station, Millbrook near Stalybridge, and the Pylon in question straddles the line of the canal.

Fans of the website will know that I am drawn to industrial heritage as well as pylons and so my interest was immediately piqued by Hartshead Power Station.  It was opened in 1926 and began operating with three Metropolitan-Vickers 12,500 kW generators (which will greatly interest my Dad if he reads this......) but these operated at 40 Hz. Later on in the year, the Electricity Supply Act set up the National Grid at an agreed standard of 50Hz and so the output had to be changed.  The power station was closed in 1979.

Electricity is still produced at 50Hz, although there is a bit of leeway to allow the demand from the grid to be balanced with the demand.  You can see real time National Grid data here to see how balanced the UK grid is at any given moment.  Data for the last 24 hours is here.  The rest of the email that accompanied the picture is below for pylon fan who are also interested in narrowboats.

For completeness, the boat is an old Thomas Clayton oil tanker built of timber in 1937 for carrying oil from Stanlow Refinery to Oldbury, near Birmingham. As the engine is a single cylinder semi-diesel of about 6 litre capacity with a 'hit and miss' governor and fires 'once every lamp-post' (ie. it idles at about 78rpm) the picture is very slightly shakey. I'm afraid this is the best scan I can get off my negative, and I tend to avoid digital.

I learn something new every time I write a Pylon of the Month post and I'll be back next month with another pylon and more interesting facts and stories related to the picture.