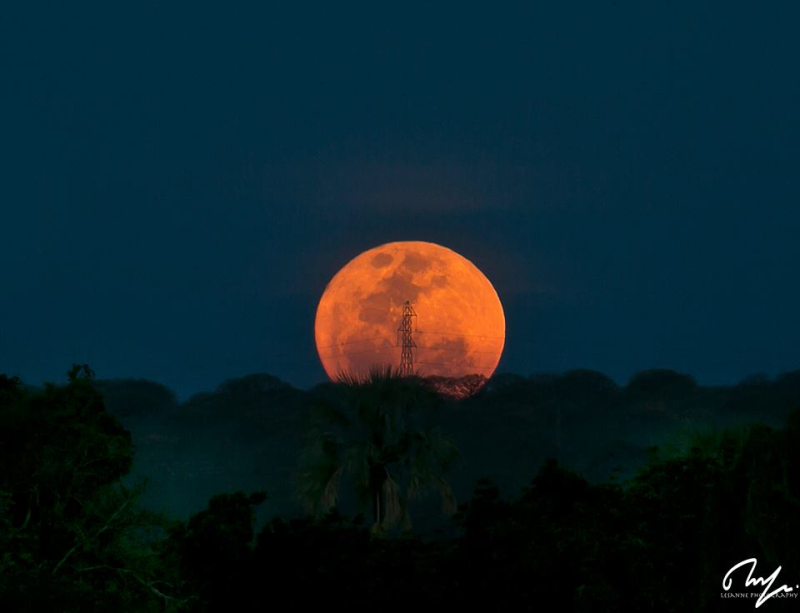 Choosing a pylon for December wasn't difficult because as soon as I saw this image it was a no-brainer.   A colleague at work saw it first (it was taken by a young friend of hers) and knowing about my pylon blog immediately alerted me to what is an amazing picture.  It gets even better when you learn that it was taken as the supermoon (more on this later) rose over the Zambesi river.  Thank you to @lesannephotography for permission to use it.

Anyway, let's talk about the supermoon. I'm with the American astrophysicist Neil de Grasse Tyson on this one.

Firstly when the moon is close to the horizon, it looks bigger because you have terrestrial objects to compare it with, but actually, it is no bigger than when it is high in the sky.  It is an optical illusion called 'The moon illusion' and you can prove it using your finger.  Hold out a finger at arm's length (it subtends an angle of about 1 degree)  and you'll be able to cover the moon easily whether it is high in the sky or close to the horizon.  It was true that on the night of the supermoon, the moon was closer to the Earth than normal, but the difference is very small.  For more information than you probably want, here is a link to earthsky.org.

But enough of that, just look back at this month's pylon and delight in the serendipity that brought it to the attention of Pylon of the Month.  Seasons greetings to pylon fans everywhere and I'll hopefully see you back here again in 2017.