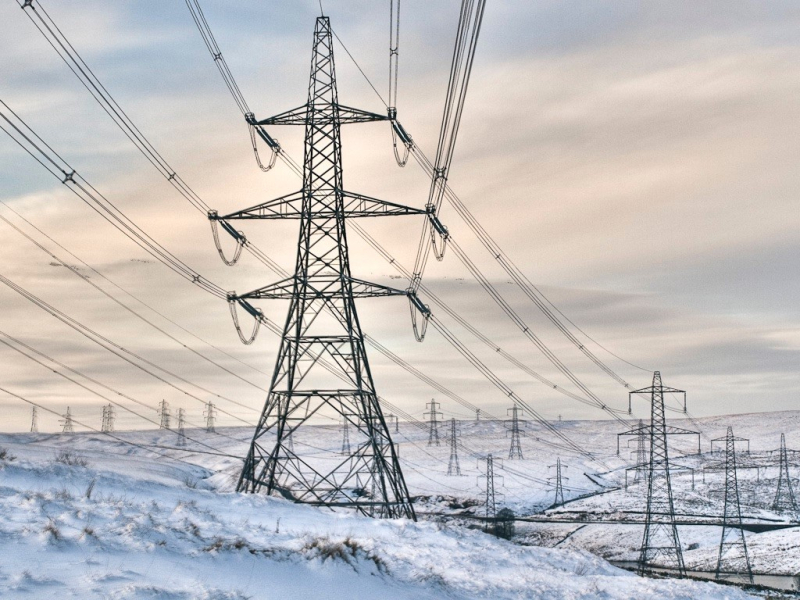 Despite the relatively mild and wet weather as I write this month's post, February seemed the right month for this fantastic picture to feature as Pylon of the Month.  It was taken in West Yorkshire just outside Ripponden by Adrian Jackson.  As he pointed out in the email he sent in with the picture:

The photo has only been treated to change exposure and colour balance, no pylons have been added. There are actually two lines of pylons which both turn through ninety degrees.

Now for some serious pylon geekery.  Talk of turning through ninety degrees above prompts me to talk about the difference between pylons where the transmission line is running in a straight line as opposed to when there is a change in direction.  In a straight line run, the line is suspended from the pylon by vertical insulators (see the second and third pylons going down the hill above).  However, when there is a change of direction (like in the pylon in the foreground above) the insulators are horizontal and the pylon is known as a tension pylon.  More from the National Grid on a page talking about the new T-pylons:

In a perfect world electricity transmission lines would run as straight as possible, but natural barriers, such as hills, rivers and roads, have to be circumvented or crossed and land rights issues can often require a route to turn a corner.  This places a lot of lateral strain on a pylon, to the side where the line turns, and so the suspension design needs to be supplemented so pylons can resist being pulled to one side.............. the extra strength required will mean that the wires will not be able to be suspended vertically from insulators, but will instead need to be held in place more securely by horizontal insulators tied to the pylon itself – hence the term, tension pylon.

You might also notice above that there are loops of wire dangling from the tension pylon that you don't see on pylons where the line is running straight.  These loops are known as 'jumper loops' and again from National Grid:

Due to the lines being tied to the structure itself by insulators, we have to provide a path for the electricity to continue to flow. So, we use ‘jumper loops’, which are short sections of electrical wire connected to the main (live and earth) wires just before they tie to the insulators, terminating the line to the cross arm. The jumper loops are designed to ensure the live wire does not touch the earthed structure.

What a great way to start 2017. A fabulous pylon picture in a Yorkshire landscape and technical pylon talk.  To make February even better, make sure that you get along to the Wellcome institute for their "Electricity: The Spark of Life" exhibition which opens on 23rd February and runs until 25th June.  If you team that up with watching 'Amongst Giants' a film about Yorkshire pylon painters starring Pete Postlethwaite then you'll really have ticked all the boxes.

Each pylon has its own story of how the the foundations gear/ erection/wiring gear gets to site. When the contract is finished , as a lineman . It good to see it again ,live or on photo,as I worked on this line.

In the second paragraph are the details from the person who took the photograph; "The photo has only been treated to change exposure and colour balance, no pylons have been added. There are actually two lines of pylons which both turn through ninety degrees."

I like this shot. When did you photoshoot this pylon?

Love your blog. I'm a pylon groupie myself and often incorporate their images into my paintings. Despite the impression they make on the landscape they seem to go relatively unnoticed by most people. Here's a link to my site - gertieyoung.co.uk.