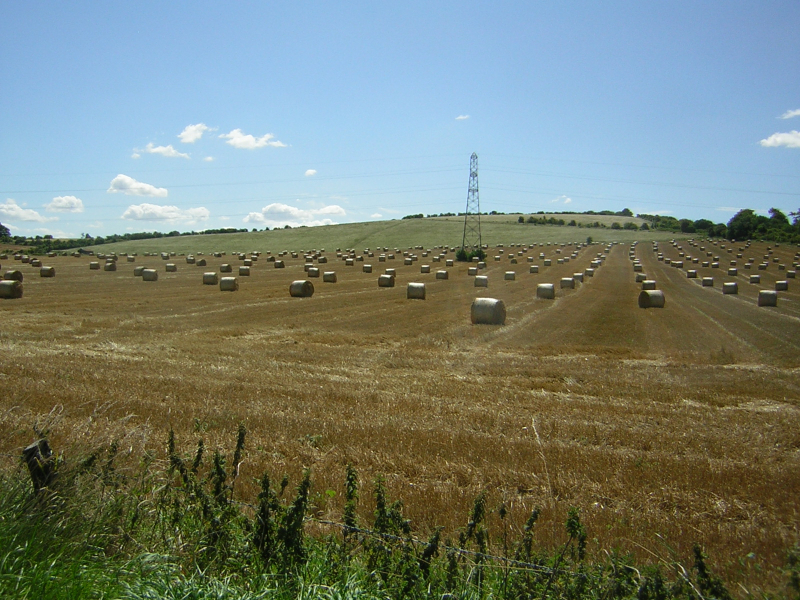 This month's pylon comes from Salisbury Plain.  It was sent in by a fan of the website who had this to say:

Driving across Wiltshire about the time of the summer solstice, I could imagine these flat fields being used to grow wheat thousands of years ago.  These big bales are reminiscent of standing stones near Avebury....

The exact location wasn't specified, but it's somewhere near the A342 and the A345 to Amesbury.  It is an area I know well because when I left Sandhurst, my first posting was just up the road in Bulford Camp.  Having then spent 16 years in the Royal Army Ordnance Corps (RAOC) and then the Royal Logistic Corps (RLC), I spent more than my fair share of time on Salisbury Plain.  The fact that the Army has owned it for so long has prevented intensive farming in a lot of areas (although not in the picture above!) and for this reason, it is a very important Site of Special Scientific Interest:

Because of the large training areas inaccessible to the public, the plain is a wildlife haven, and home to two national nature reserves, but there is concern that the low level of grazing on the plain could allow scrub to encroach on the grassland. The plain supports the largest known expanse of unimproved chalk downland in north west Europe and represents 41% of Britain's remaining area of this wildlife habitat. The plain supports 13 species of nationally rare and scarce plants, 67 species of rare and scarce invertebrates and forms a site of international importance for birds.

It is also an archaeological treasure trove with Stonehenge as the most famous of its prehistoric monuments.  I was once told that the reason for there being so many prehistoric and Neolithic sites on the plain is because it wasn't covered by forest that needed clearing without ready access to metal axes which came about a thousand years or so after Stonehenge was completed.  The pylon in this picture might not be as iconic as Stonehenge, but it does add something modern to this ancient landscape.