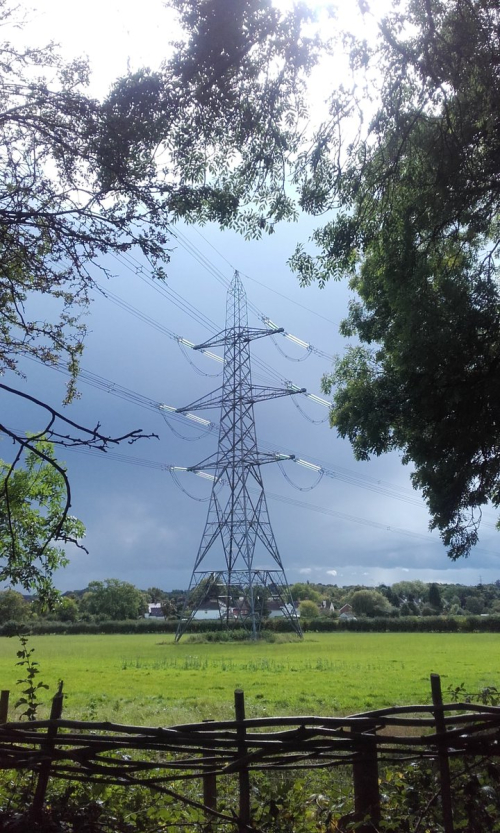 The usual 'too much to do and not enough time to do it' at the start of a new academic year almost made September another month without a pylon.  Then the picture above popped up on @pylonofthmonth with 'Contender for September' as the byline.  That spurred me into action (well sort of - it's now over a week since then but better late than never!) and so here we are. 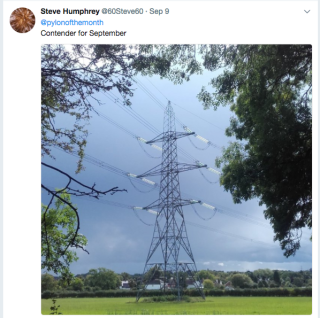 Amongst all the other pylon pictures that appear on Twitter, it was the contrast between the white ceramic insulators and the dark sky that caught my eye.  You can even buy these ceramic discs as garden ornaments although they brown rather than white.  The green field then adds another colour to the composition that appeals to my aesthetic sense.  The pylon can be found in Mountsorrel, Leicestershire and a bit of investigation reveals that Mountsorrel is a rather lovely village on the River Soar south of Loughborough.  According to Wikipedia, the unusual name of the village also has an interesting provenance

Whilst the origin of the name 'Mountsorrel' is still not understood fully, it is thought that the English nobility of the time named Mountsorrel after Montsoreau, a village in France close to Fontevrault, where Henry II was buried. The name Mountsorrel is of Norman-French origin and is thought to have developed due to the close likeness of Montsoreau and Mountsorrel – both settlements sit on rivers, the Loire and the Soar respectively, and are overshadowed by surrounding hills.

To see the pylon from the place where the picture was taken, you need to head to the Mountsorrel & Rothley Community Heritage Centre.  Having seen the pylon, there is plenty to keep you busy at this location including the Mountsorrel Railway, the Nunckley Trail and Granite's Coffee Shop to name but three.  Leicestershire is one of the parts of the UK that I've visited least often and so an excursion to Mountsorrel might just give me the excuse I need.

Good point. It was quite an issue getting permission from landowners so you might be onto something......

I can understand them being there longer than the M69, but they still don't run straight.
I was wondering if build sites were possibly dependant on the landowners giving their permission 'back in the day'.
Or there could be guidelines regarding geological conditions below when erecting them.
Who knows...
Regards.

Good question. I think probably because the pylon lines pre-date the motorway and so engineering/legal/technical considerations dictated the road route and so this means the pylons keep crossing as the road changes direction.

Hi,
Not a comment as such, but a question.
Can you tell my why pylons often don't run in a straight line?
For example, if you drive along the M69 between Leicester and. Coventry, they seem to weave all over the place, crossing the carriageway quite often.
Thanks.

I once passed through Mountsorrel on a barge. A special place.

I was born in Leicester and raised in Loughborough, with plenty of trips to Mountsorrel and the surrounding villages. I'll keep an eye out!