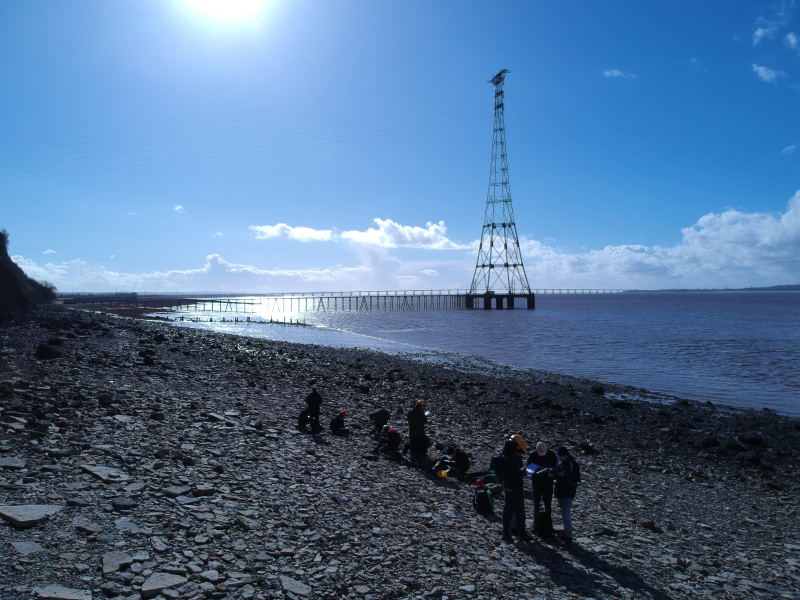 April's Pylon of the Month was provided by a colleague (@RadleyGeol) on a recent Geology field trip and it breaks new ground for the blog because it is the first one on the website to have been taken by a drone - a DJI Spark 2 no less.  The field trip was taking place at Aust Cliff on the English side of the Severn Estuary and according to the Avon RIGS group (RIGS? Regionally Important Geological & Geomorphological Sites - do keep up):
The river cliff at Aust is a spectacular outcrop of Mid and Late Triassic to Early Jurassic sedimentary rocks, an impressive geological archive for tracing the drowning of an ancient hot, arid desert between ca 221 and 195million years ago.
Given this, it's easy to see why Geologists would be drawn to it and when you add in the opportunity for a bit of pylon spotting it starts to look like the kind of place that should be on everyone's 'must visit' list.  Not convinced? Well surely even the most sceptical of people will be convinced if I reveal that the Aust Severn powerline crossing has the longest span in the UK at 1,618m and that the pylons themselves are the second tallest in the UK at 148m.  That means it only ranks 28th in the world and pylon enthusiasts looking to travel further afield would do well to check out Wikipedia which lists powerline spans in 'flat areas with high pylons' and 'in mountainous areas requiring shorter pylons'.  China would have to be top of the list of places to visit if you want to tick off as many as possible on the 'flat areas' list although personally, it's the Suez Canal crossing which rather catches my eye.  On the mountainous areas list, Greenland looks like the top contender for pylon related tourism, an as yet untapped market for any would entrepreneurs reading this!
Come back next month for more pylon facts and trivia, but in the meantime, don't forget @pylonofthemonth on Twitter.  For those who haven't yet got round to supporting my Pylon book with Unbound. It needs a lot more people to pledge their support if it is ever to become a reality......

Hello, we have been pylon fans for nearly 2 years now and would like to say how much we love this website. Thank you for all your hard pylon searching and are very, very excited for October’s pylon.

Oh well - I aim to please, but if this month's pylon doesn't do it for you then it might be that you are beyond help. Keep reading the blog to see if things improve!

I was rather dissatisfied with this months pylon and i am considering if I really wish to renew my subscription. I suggest you get your act together and start finding some proper awe inspiring pylons or I shall give you a slap