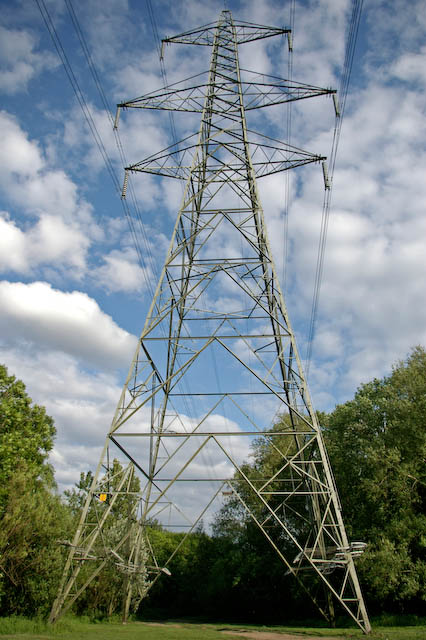 November was another pylonless month and with December rushing by, I decided that action had to be taken to ensure that two fallow months in succession didn't come to pass.  A recent email inspired this month's post:

I wrote a poem about a pylon and was wondering if you would like to feature it on your blog? I live in Manchester, and the poem was inspired by a specific pylon in Sale Water Park.
The pylon that acted as the poetic muse is the one above courtesy of Geograph which has this to say about it:
One of the dominant features of the square is the high voltage power line which crosses Sale Water Park. This pylon is near the south eastern end of the lake. A footpath runs beneath the legs. There is a second pylon in the square on the northern shore of the lake.
That's enough background - let's get to the poem itself written by Annie Muir, an award winning and published poet based in Manchester.  To find out more visit her blog https://time41poem.wordpress.com/

She stands by the lake
like the ribcage of a dinosaur.

A spider’s web for catching clouds
with six arms like a god or six legs like a bug.

She is pear-shaped,
the capital A at the start of the alphabet,

caged in her steel corset dress
and barbed wire socks. A puppeteer of seagulls

but also a puppet herself, held up by wires
like lines indicating movement –

she is the shed skin of a moment in your life. A monument
to the here and now

tied to your new ones by the laces
but trailing behind, covered in mud.

I couldn't find any email address to you to I sanding my message here.

I was planning to write to you for a while now. I am a big fan of your blog and it is not by a coincided. I worked in design studio in Kraków (Poland, here where I live), which was dedicated to designing all the high voltage line infrastructure including station, pylons etc.. My team was focused specificly on pylons and their foundations.
I will briefly introduce myself. Around 3 years ago I finished my master degree on structural engineering and after a while I stared working in the company. My job was to create detailed 3D models of pylons from guidelines from the senior engineer. Usually this took me a few weeks per 110kV line pylon to prepare the model and drawings for fabrication (in Poland we have lines ranging from 110kV, 220kV, 400kV, and one 750kV which doesn't work). I was involved also in foundation design. After a while I've got a little bored - it is create almost the same 3D model over and over again. I stared looking for some extraordinary designs of pylons and I stable across many interesting articles, this two in particular (I will sent you rest of them at the end):
https://www.bbc.com/news/world-13473408
https://www.bbc.com/news/uk-32234656
That is how I found out about pylon of the month. My work colleges were really amused by the stories that people "outside" may be interested in pylons. We used to celebrate, in my team, name-day with a cake and chit chat across the table and that was when I told them this stories I had found out.

I had a plan to design some unique pylon - maybe one day... Now I am really fascinated by this chair:
https://www.tomdixon.net/family/post/pylon?___store=eu
(I have 3D model of it and maybe I will make my version)
I have also other idea - to a collect music videos in which pylons were filmed (my favourite is video to Arcade fire - Everything now). The list is short right now, but maybe someday, with a help of crowd, it will be extended.

A year ago I changed my job. The last project I did were pylons for Africa (it is, I suppose, the last place on Earth to be widely interested in lines with pylons). I work now at the university. I decided that this job gives my more freedom, which I need right now. At the same time when I had finished master degree I had also started PhD. My uni is close to my previous job and I have good relations with the team. We recently saw film 'Among Giants' together. I still feel sentimental about pylons.

I wanted to send you also some photos, but only option here is by external link so here they are:
https://mega.nz/#F!xtI1BaTA!uk6vrhrDKwmzvMrK6tFyzQ
You can find there some photos which you can use, or be inspired by. The one is a view to the Wisła river in Kraków. If you are ever planning visit to Kraków I could introduce you here to my colleges and explain you the process of designing pylons.
Nevertheless, Good luck with your book!

All the best,
Mateusz Dryzek

This may be interesting for you:

“A footpath runs beneath the legs”.

I love this, the normalisation and integration of the pylon with daily activity.