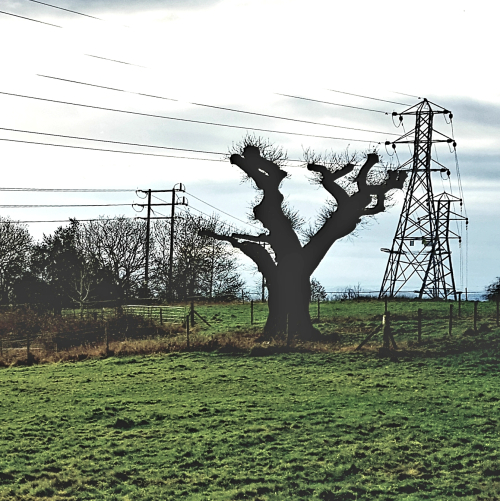 Having missed March and with April nearly half gone, I was determined to get a new pylon on the blog and so this month's pylon is another one sent in by a fan.  It comes freighted with historical significance as the excerpt from the email that accompanied the picture shows.

Beside a path followed by Cinderloo protesters 200 years ago stands a sturdy oak.
A witness to the anger of the colliers and the retribution wreaked on them by the local yeomanry.
The oak looks shocked, its limbs jolted by the electrical waves transmitted by the pylon.
Perhaps waking from a nightmare, reminded of a vision of poverty and despair that it observed in February 1821.
Coming originally from Manchester, I'd heard of Peterloo, but Cinderloo was new to me. A quick Google search leads to https://cinderloo.com where you learn that

The Cinderloo Uprising was a relatively unknown early 19th century industrial disputecentred around the small East Shropshire town of Dawley. While the dispute started with only 500 miners a crowd of over 3,000 eventually massed on a pit mound located at Old Park.

Three miners lost their lives, including Thomas Palin who was hanged for 'felonious riot'. On that rather sombre note, I'll leave it there for this month. As always, go to @pylonofthemonth on Twitter for more regular pylon action.

What happens to old pylons when they are replaced with bigger ones? Are they recycled, or sent somewhere else? Where in the UK are they made and if the old ones are removed then where do they go?