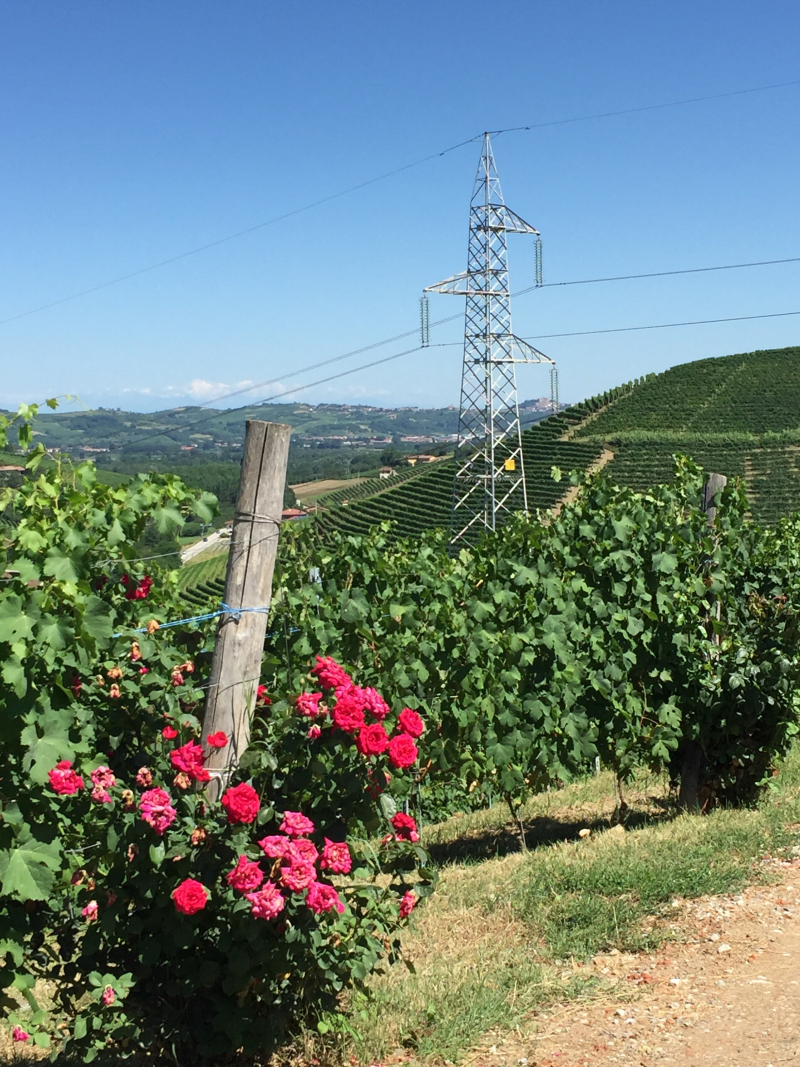 This month's pylon is from Italy and will be particularly appreciated by pylon fans of a bibulous disposition. It was sent in by a fan of the website and was taken in the Piedmont region of northwest Italy.  In particular,  the vineyards of Barbaresco, and according to wine-searcher:

Barbaresco is one of the great wines of the Piedmont region in northwestern Italy. Historically it was called Nebbiolo di Barbaresco (Nebbiolo being the grape it's made from) and was used by the Austrian General Melas to celebrate his victory over the French in 1799.

Such is the beauty and distinctiveness of this part of the world, that in 2014 it was recognised as a World Heritage Site because '......the Piedmont vineyards provide outstanding living testimony to winegrowing and winemaking traditions that stem from a long history, and that have been continuously improved and adapted up to the present day'.

So pylon fans heading for this part of the world can tick off the rather splendid asymmetric pylons in the vineyard before retiring to a bar to sample the local wine.  In doing so, it would be wise to ensure that the difference between the two local wines Barolo and Barbaresco is properly appreciated.

The main difference in Barolo and Barbaresco is in the soils. The soil in Barbaresco is richer in nutrients and, because of this, the vines don’t produce as much tannin as found in the wines of Barolo. Both wines smell of roses, perfume and cherry sauce — and they both have a very long finish. The difference is in the taste on the mid-palate; the tannin won’t hit you quite as hard in the Barbaresco.

The quote above is from wine folly and with plenty of wine recommendations to try out, oenophile pylon fans will be in heaven.

It has been published and your comment was one of the reasons that I got round to writing it up!

Hello, when will the October and November Pylons be released? Thank you.

If you click on 'About' at the top right of the blog you get an 'email me' option. Looking forward to receiving a picture!

Here I give my heartfelt paean
to the mighty lovely pylon;

sturdy girls that have no secret
o’er the country lanes.

How my love runs in this syntax,
like the lines from Didcot and Drax;

elemental as the lifeblood
flowing through my veins.

Hello, that is rather lovely, and in such a beautiful setting.

How do I submit a picture?

This pylon made my day, thankyou Pylons•