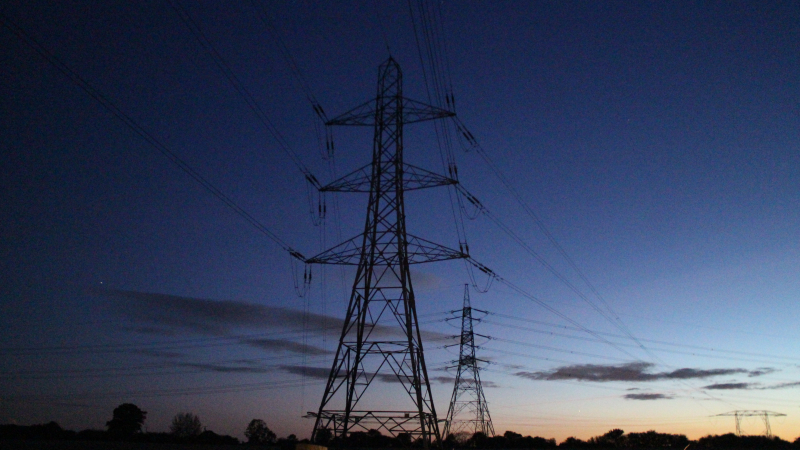 After a dry January on the pylon front (but not on the alcohol front....), February's pylon is a cracker. As with so many of the pictures on the blog, it was provided by a fan of the website and the email that accompanied the picture is an inspiration to pylon fans everywhere.
We've always had a fascination with pylons, living on a farm as kids we'd often walk out into the fields and stand under them and marvel.
The picture was taken near the village of Claxton in the Ryedale district of North Yorkshire.  My only visit to that area was nearly 25 years ago and a bit of Googling led me to the place I stayed; The White Swan in Pickering.  It was easy to track down because just about the only thing I remembered about the stay was the great selection of St. Emillion wines.  It's good to see that nothing has changed in the intervening years on the wine front!
Anyway back to the pylons and to the information provided by the photographer.
Two high voltage power lines cross paths, and in order to allow one to pass under the other a large pylon has been constructed for one power line, while the other power line has been split into two smaller pylons that pass under the higher power line.
Then there is a lyrical passage that will surely elicit nods of recognition from readers of this blog.
I think there is a beauty to this structure. Firstly in a mathematical sense, the symmetry of this arrangement of the pylons and the geometric shapes constructing the individual objects. But also in the sense of how these gentle giants contrast so heavily with their natural surroundings but managed to blend in so unnoticed by so many as if they were simply trees that had always been there. There's also the fact that these objects hold such importance to everyday life, and that hours upon hours of thought will of gone into the placement and design of this structure at the hands of engineers - only for them to peacefully blend away to the countryside: noticed by only a few.
Prompted by the mention of the word symmetry above, I'll finish for this month with a hiveminer generated collection of beautiful symmetrical pylon images. 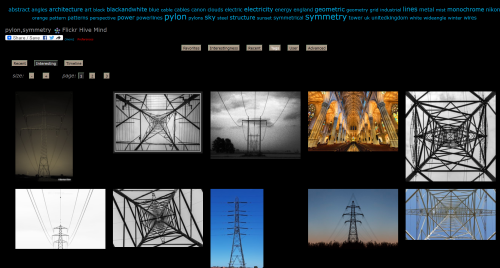