March was slipping away, but like an awful lot of people, I find myself spending more time at home and so there really is no excuse not to get writing.  Normal life may be suspended for a lot of us at the moment, but the people working at power stations are vital and so their work goes on as, I'm sure, does the work of anyone working on the electricity distribution system.  They deserve our grateful thanks.
March's pylon was sent in by a fan of the website earlier this month after he was distracted on an early morning run near the River Tyne.  The pylon above is on the south side of the river, but there was also a picture of the pylon on the north bank which I've included at the foot of this post.  They are wonderfully atmospheric images and I'm afraid that I can't resist the urge to include a link to Fog on the Tyne by Lindisfarne, the English folk rock band from Newcastle Upon Tyne.
The email that I received also included the revelation that:
.....as a former electricity network company (Northern Powergrid) employee and long-term energy networks geek, I have only recently discovered your pylon of the month page, and am disappointed that I have been missing out for so long!
I'm delighted to welcome another pylon fan into the fold.  The email went on to say that "This is not far from the Stella North and Stella South GSPs". For those not in the electricity distribution game (me included - thank you Google), GSP is an acronym for Grid Supply Point and is a "Systems Connection Point at which the Transmission System is connected to a Distribution System". I'm not sure that I'm too much the wiser as a result of having looked it up, but as a result of doing so I did discover that Stella North and Stella South were two power stations that have now been demolished.   Stella South, a coal-fired 300 MW power station, was built on the site of the famous Blaydon races which gives me an excuse for another musical interlude.  It has been replaced by a housing estate.
That's all for now, although with only a week of March left, you won't have to wait too long for another pylon.  Until then, stay safe. 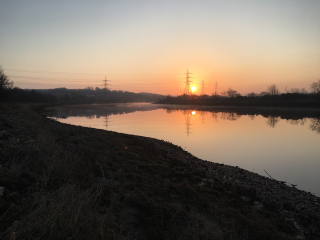