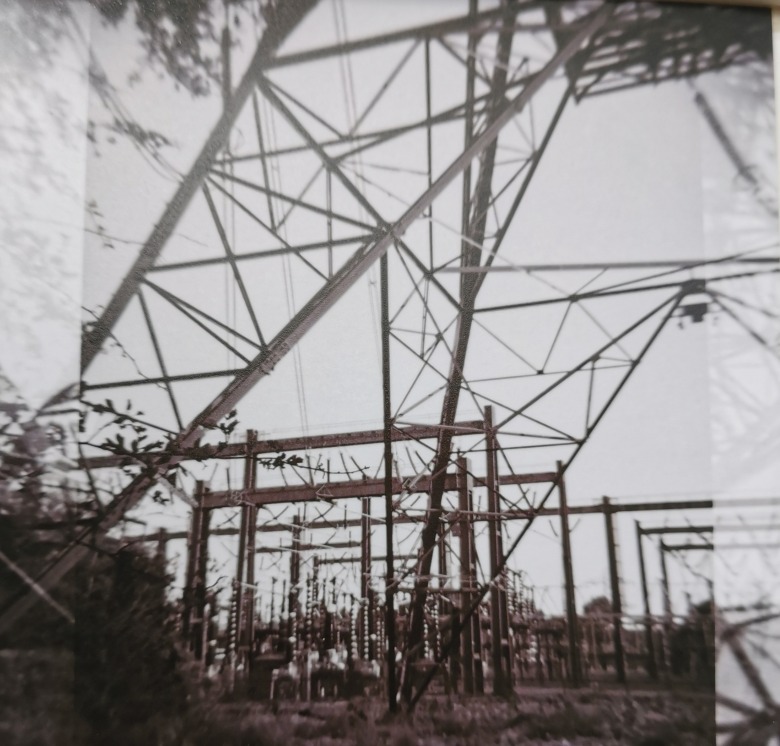 September's Pylon of the Month is a bit of a retro photograph that I took myself on a Holga camera which is a "true cult classic of analogue photography" according to this Lomography website. I'm still experimenting with it as you can see from the fact that the image above includes part of the preceding and following frames and I decided to keep that in the (probably vain) hope that it would look a bit more arty and experimental.

Anyway, the picture is of the Cowley substation near Oxford (and Didcot power station) where the 400 kV lines from Didcot get stepped down to 132 kV.  The marvellous 'High Voltage Substations in the United Kingdom' is your go to source for information if you are looking for something similar in your part of the UK.  The Electrical Engineering Portal tells us that High voltage substations

are points in the power system where power can be pooled from generating sources, distributed and transformed, and delivered to the load points. Substations are interconnected with each other so that the power system becomes a meshed network. This increases the reliability of the power supply system by providing alternate paths for flow of power to take care of any contingency so that power delivery to the loads is maintained and the generators do not face any outage.

I particularly like the busbars that can be seen in the background and they give the picture a futuristic vibe. As you approach the site, the contrast to the green fields sloping down to the nearby River Thames is particularly striking.  The Cowley substation has also been in the news recently because it the site for the largest hybrid battery ever deployed. The 50 MW battery will power a 10 km network of electric vehicle charge points. This energy superhub is needed to support the more widespread use of electric vehicles and the charging points they will need in Oxford. It should be completed by 2022.

I don't do prints, but I have been thinking about a Pylon of the Month calendar to raise money for charity. It's on my 'to do' list (but not near the top!)

This image is fantastic. Do you do prints?

On the top right of the blog is an 'About' link that tells you a bit more about me and also has an 'Email Me' option.

I have an astrophotograph of nearby high voltage pylons. Someone told me you accept images for pylon if the month - how do I apply?
Thanks
Paul Kertes