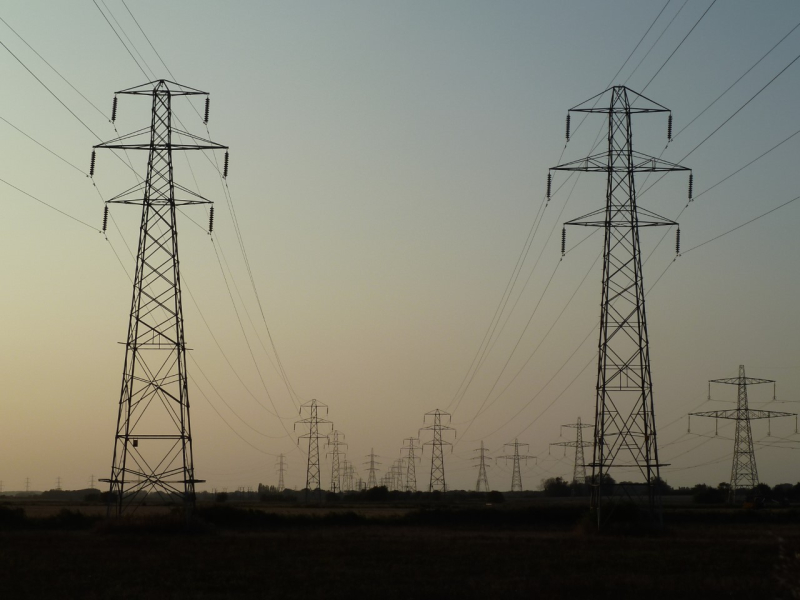 October's Pylon of the Month is a readers' choice. Look at the amazing image and the "three parallel parades of pylons" as the fan who sent the picture in called them in a pleasingly alliterative phrase. Once you've looked for long enough to appreciate the beauty of the image, choose the one you want to be your own personal pylon of the month - I'm avoiding the obvious 132 kV choices in the foreground and going for the 400 kV wide boy on the far right of the picture with two lines on one cross arm.  Why it's constructed like that is something that I'd like to find out more about.

..named after a Dutch Drainage Engineer called Ploeg, whose grave is in All Saints Church, West Stourmouth. Ploeg, being the Dutch for a plough, the hamlet takes its origins from the Dutch Protestant tradition of draining marshland by creating a ploughed ditch

In this era of fake news, I'll mention that the Wikipedia page notes that a citation is needed to substantiate this story and as this note was made in September 2016 and no verification has been added, caution is needed if you are ever tempted to hold forth at a party about the origin of place names in Kent.

The fan who sent the picture spotted them whilst walking the Augustine Camino, a new pilgrimage route in Kent from Rochester to Ramsgate.  A quick look at the open infrastructure map for the area shows the parallel lines very clearly with the 400 kV Richborough connection in purple and two 132 kV lines (Canterbury North - Richborough and Richborough - Monkton). 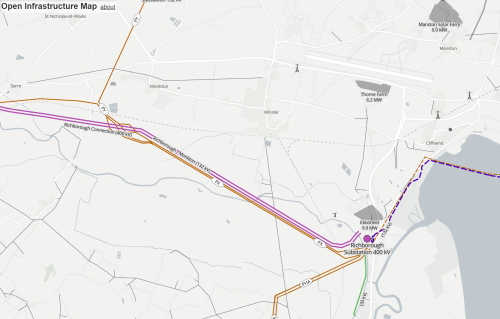 It also shows Richborough power station which closed in 1996, although the national grid interconnector from the original power station is still in place, and is now the grid link for the offshore Thanet wind farm. The 1000 MW HVDC from Belgium also makes landfall on the site and is known as the Nemo link.  As a Physics teacher, High Voltage Direct Current (HVDC) is pretty high up the list of things that I want to understand better and this article from the Powermag website looks like a good starting point.  The icing on the electrical cake is a couple of nearby solar farms - plenty to see if you fancy a pylon field trip to the area.  I certainly do - Kent is one of the areas of the UK that I know least about so I'll add it to my growing list of things to do once normality returns.

The 400kV Towers on the right of the picture are L12 LD (Lowhight Double suspension towers)
They were designed in the late 1980's / early 1990's
The L12 LD and L12 LD30 type towers are to be used where skylining visual issues and / or in the vicinity of aircraft flight areas dictated.
i.e. in open flat country or where an OHL route goes over / crests (at 90 Deg) hill ranges and or where low level (RAF) flying happens.
They effectively drop the overall height of a 400kV tower line down by 1 phase level to nearly the same height as a 132/275kV designed tower
However, "close up / in your face", I have always thought they were more visually intrusive due to the additional steel weight making them less see through

What a wonderful photo!