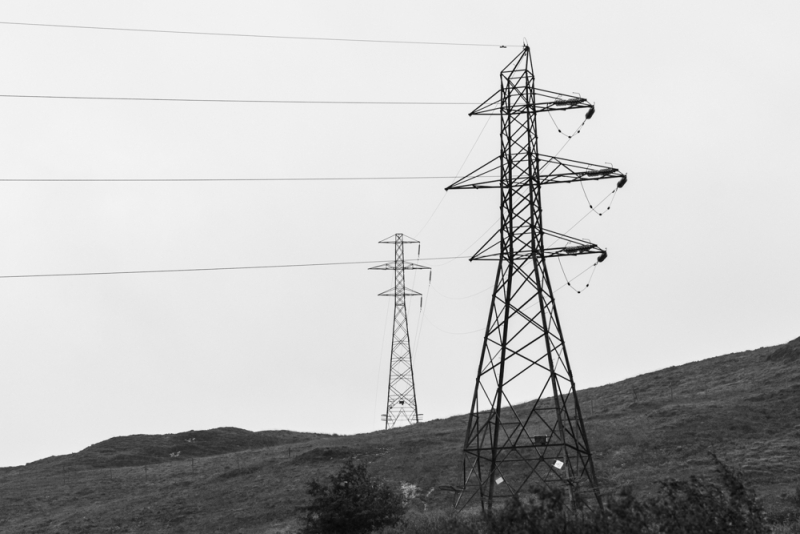 December's pylon is from Scotland, but this month marks a first for the blog because the article below is written by the first ever guest editor. If it's good enough for BBC Radio and Vogue then Pylon of the Month is going to jump on the bandwagon and hand over the reins to India and her Dad for the final post of 2020.

Dad’s and my Scottish Highland Roadtrip was the highlight of 2020, which doesn’t quite put it into perspective, considering the year we’ve had. The Highlands are littered with pylons, a monstrosity to some but a magnificence to others. Dad and I fell into the former category until we found Pylon of the Month, which allowed us to see pylons through the eyes of the fanatics – we are now pylonophiles.

As we drove away from the ferry port and onto the main stretches of the Isle of Skye we were met with a dramatic landscape. Undulating lowlands, fertile straths and broad estuaries – the perfect backdrop for a pylon picture. We rounded a bend and there it stood, unwavering in the gust. I was reminded of the infallible lyrics from ‘The Monster’ by Welsh Rock band, The Automatic:

The next morning, we woke to find the true meaning of the word, ‘rain’. We had been informed that rain isn’t rain unless the droplets were smacking you in the face horizontally, not falling vertically.  Nevertheless, ever the optimists we jumped into the car to take in the scenery. As we turned out of Broadford, through the frantic windscreen wipers we saw, in all its black skeletal glory, a pylon. We stopped in a Passing Place, and Dad, throwing caution to the wind, leaving the waterproof trousers behind, launched himself out of the car, grabbing his camera in one fluid movement. Not all heroes wear capes. In a few swift clicks, we had, as many millennial YouTubers say, ‘GTS’ (translation for anyone born before 2000: ‘Got The Shot’) and were safely back in the car, off to find our next niche-blog obsession.

This is an amazing story. What a beautiful pylon 😊.