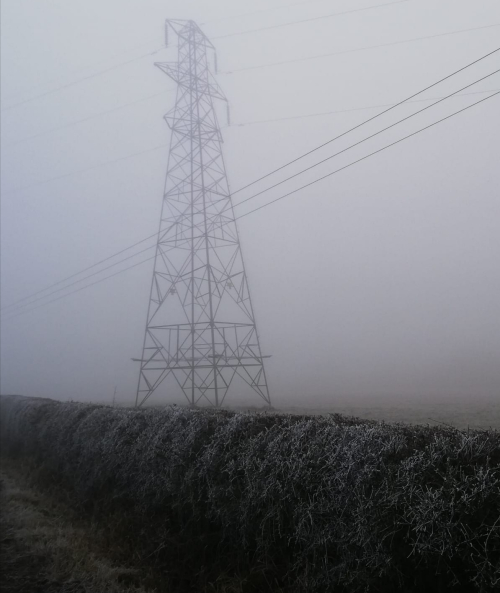 The first pylon of 2021 comes from Boars Hill just outside Oxford and was sent to me by a friend after a walk with his wife during the recent cold snap.  The hoar frost on the hedge and the fog1 made for a wonderfully atmospheric scene that can surely only have been enhanced by the pylon's presence. Boars Hill is a beautiful area for a walk if you are in the Oxford area and was where Matthew Arnold was inspired to write Thyrsis, the poem in which the famous lines that have come to define one misty-eyed2 perspective of Oxford.

And that sweet city with her dreaming spires

She needs not June for beauty's heightening

It is clear from the pylon design (PL16?) that this is a 132 kV line and a quick check of the Open Infrastructure Map confirmed this and also showed the lower voltage lines that you can see in the foreground of the picture. In the UK, three phase supply on wooden poles is usually either 11 kV or 33 kV but sadly, the map doesn't specify the voltage on such lowly lines. Interestingly, the 132 kV tower only seems to have a single circuit (3 lines - one for each phase) with two lines on one side of the tower and the third on the opposite side. I'm not sure why so I'll seek out the answer when I tweet this out as @pylonofthemonth

For more about Boars Hill, the Oxford Preservation Trust website is wonderfully informative.  The literary links to the area are legion, with four Poets Laureate having lived there; Robert Bridges, John Masefield, Robert Graves and Edmund Blunden. Elizabeth Daryush, the daughter of Robert Bridges, was also a noted poet and the garden of her house on Boars Hill is managed by the Oxford Preservation Trust. A visit there would be just the ticket for any pylon fans with a literary bent.

Only 2 poets laureate! Graves and Blunden were Oxford University professors of poetry (and so was Arnold). If you give me an address I'll send you my book 'Clough, Arnold and the Poets on Boars Hill'