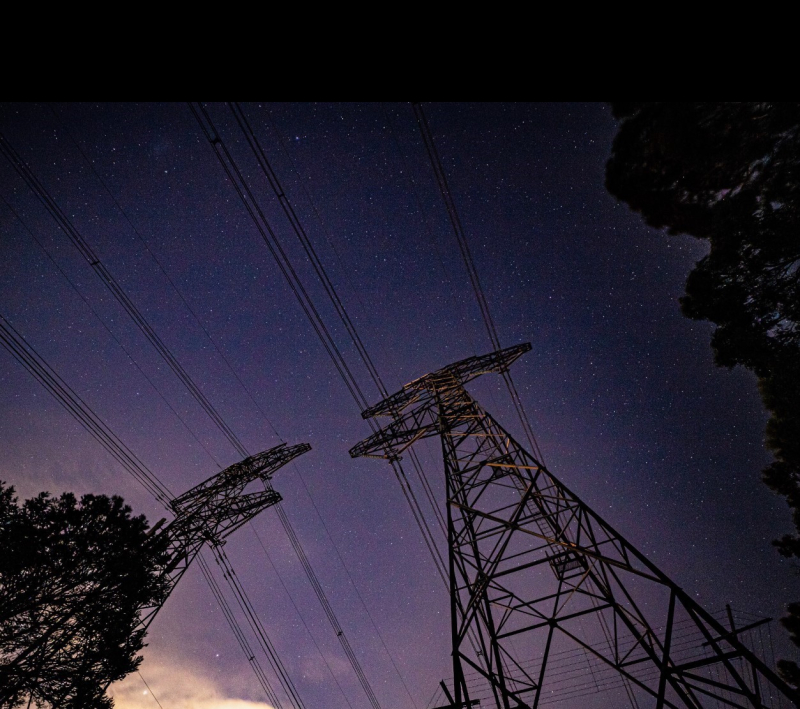 February's pylon comes all the way from Melbourne, Australia and was taken during August last year in the suburb of Park Orchards, some 17 km from the city centre. It really is a stunning photograph that captures the night sky beautifully in a 5-second exposure shot at ISO 2000 with a 14mm f2.8 prime lens and Canon full frame camera. Details like that in the email to which the photograph was attached tell me that this was taken by an accomplished photographer and you can verify that for yourself by going to Instagram @pk____photography. The email continued:

"Since we are presently in Covid lockdown here in Melbourne and can't go more than 5km from home, my photographic opportunities are limited. We did have a fairly clear night recently with a new moon, so I thought I would try this shot to contrast human vs cosmic power"

Increase in astronomy has increased significantly during lockdown and for any UK pylon fans looking to learn more, I would highly recommend the Society for Popular Astronomy.

One of the great things about writing this blog is that the pylons I post lead me down interesting internet highways and byways and I always learn something new. In this case, a quick look at the fascinating 'Guide to Australia’s Energy Networks', led me to the discovery that Australia has some 500 kV overhead lines as part of the transmission network (compared to the UK where we only go up to 400 kV). A bit more digging led me to Moorabool Shire Council's September 2020 'Comparison of 500 kV Overhead Lines with 500 kV Underground Cables' which is part of the Western Victoria Renewable Integration Project whose aim is:

to address transmission network limitations.....the driver and benefits of this Project are to unlock up to 6GW of renewable energy sources, predominantly wind and solar generation, in North West of Victoria.

Reading on (it really is quite a fascinating report.....) led me to the discovery that Ultra High Voltage (UHV) AC power transmission is defined as 500 kV or over. The UK's 400 kV lines are merely EHV (Extra High Voltage) and I assumed this was because the distances over which we have to transmit electricity in the UK are considerably shorter than in larger countries.  The countries that are currently operating transmission network at UHV levels are Ukraine and Poland at 750 kV, South Korea at 765 kV, Brazil at 800 kV, China, Japan and Russia at 1,000 kV, with India is currently conducting experiments and planning for a transmission network at 1,200 kV. That theory about UHV corresponding to longer transmission distances holds up in some cases, but a quick Google tells me that that the UK is 144% larger than South Korea. More work is required here at some point because when I Googled "UHV South Korea" I was met by a wall of information and if I'd dived down that internet rabbit hole I might not have emerged for some time.

The Moorabool Sire Council report also includes this moving picture ( amongst others) of a fallen 500 kV pylon, felled in its prime by a storm in January 2020. 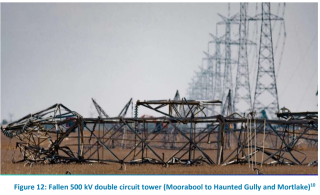 The conclusion of the report includes this assessment:

A feasible alternative to the proposed 500 kV double circuit overhead line would be 500 kV double circuit underground cable. Whilst this would be approximately ten times more expensive than an overhead line, the overall cost impact could be reduced by placing only the most sensitive sections underground. Although using underground cable for a portion of the route is not a simple solution it appears to be technically feasible.

Plenty to chew on there for the next few weeks so that's all for this month. See you in March!

Around the corner from these pylons is a mothballed 500 kV line - installed in the 1960s but replaced by a new line in the 1980s, and still disconnected today.