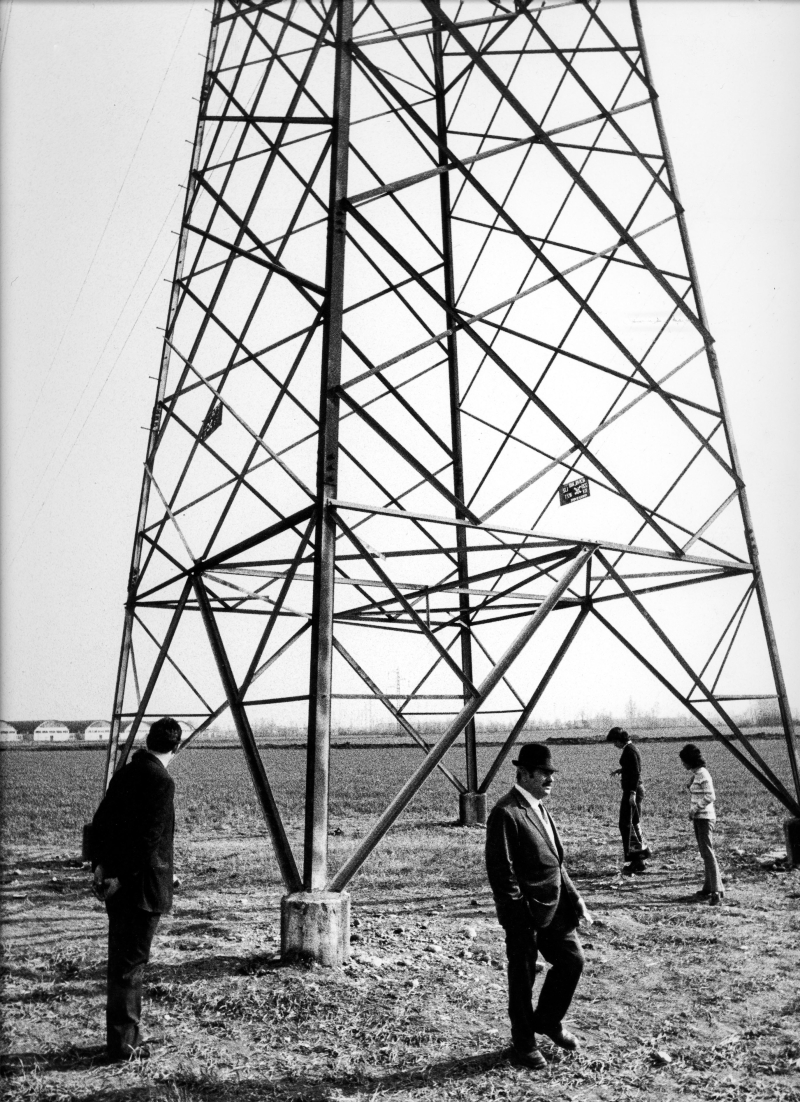 April's pylon marks a new departure for the blog - it's an Italian true crime pylon with a grisly but fascinating story attached. From the London Review of Books article which inspired the post:

A bearded man lies flat on his back, arms wide apart, in a field. He has one leg. Nearby, some wires hang from the base of an electricity pylon, to which a box seems to be attached. The man is Giangiacomo Feltrinelli, 46 years old, a political militant, publisher and millionaire. The photo was taken on 15 March 1972

Let's deal with the more usual pylon facts first before we dive into the rest of the story. The pylon is located in Segrate, a town in the Milan metropolitan area of northern Italy. According to Trip Advisor, the number one thing to do in Segrate is to visit the Palazzo Mondadori, the headquarters of the Mondadori group, one of Europe's leading media companies.

The palazzo was designed by the legendary Brazilian architect Oscar Niemeyer, a revolutionary of modernism who amongst many other great buildings, in 2003 at the age of 96, designed the Serpentine Gallery in London's Hyde Park.  I probably don't need to remind readers of this website that Italy played a big part in the very early days of electricity with Alessandro Volta inventing the battery (or voltaic pile as it was known at the time) as a result of his interest in the work on animal electricity of fellow Italian Luigi Galvani.

Back to the true crime story and the body of Giangiacomo Feltrinelli which was found at the foot of the pylon. Feltrinelli is most famous for translating and publishing the novel Dr Zhivago in the west after the manuscript was smuggled out of the Soviet Union. It led to Boris Pasternak being awarded the Nobel Prize for Literature in 1958. Feltrinelli's death was apparently as a result of trying to blow up the electricity pylon as part of his involvement with ultra-left politics. You get a feel for how complicated a man he was from this review of a book, Senior Service, by his son Carlo.

Giangiacomo Feltrinelli's life reads like an intellectual thriller in which books and bombings collide, a life fuelled by money, passion and politics, where mansions and libraries are ransacked for clues. Feltrinelli was, according to his son, "a difficult man devoted to a certain type of risk, together with a surprising form of irreverence that speakers of Yiddish [know] as "chutzpah". This was what made his every gesture inexplicably charismatic, even when it wasn't". He wore "stupendous ties", smoked cigarettes that give this book its title, and, even in the words of a conservative American enemy, "conditioned the history of a decade".

That's quite enough action for one month. For readers with a more delicate disposition, I can assure you that May's pylon will almost certainly not involve dead bodies and hard left politics.