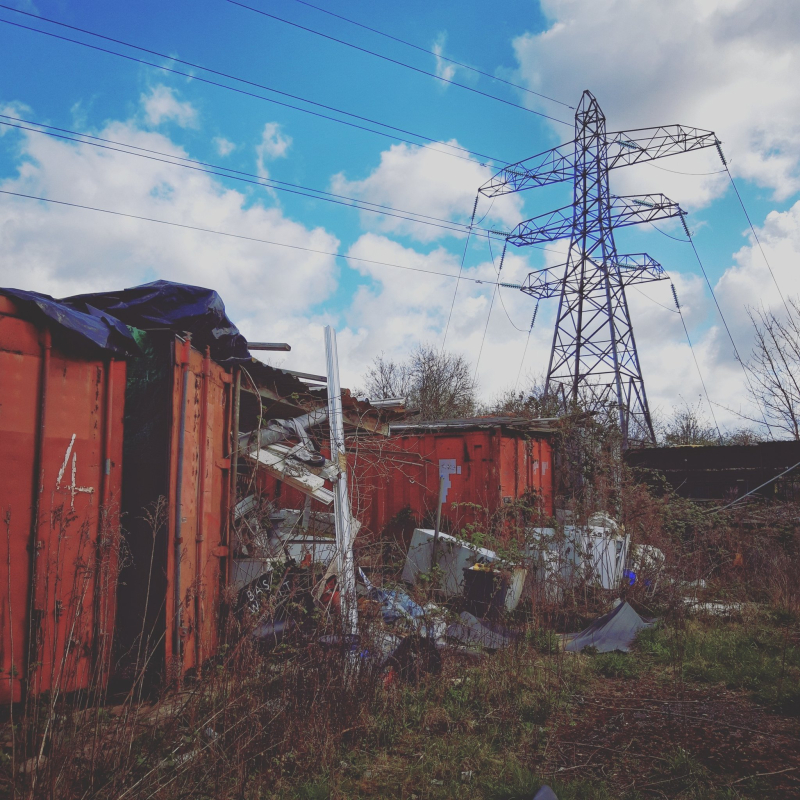 Over the last year, travel has been severely restricted for pretty much everyone so it seems fitting that May's Pylon of the Month comes from within walking distance of my house. The picture was taken by a colleague in West Oxford close to Binsey lane, a road that leads from Port Meadow to the Botley Road. Fans of His Dark Materials might be interested to know that Binsey lane features in chapter 11 of The Secret Commonwealth, the second novel in the Book of Dust trilogy. This part of Oxford is ideal for walking, with the added advantage of an excellent pub, The Perch, quite close to the pylon. Next time the weather is set fair on a Sunday, what better way to spend a few hours than a walk around Port Meadow followed by a pint and a pylon.

I like a lot of things about this picture, but even I've got to admit that it clashes somewhat with the idyllic water meadows and dreaming spires that might be conjured up when thinking of Oxford. It's that contrast, however that draws me in and this zone where city and countryside fray into one another is explored in an excellent book, Edgelands, by Paul Farley and Michael Symmons Roberts.

The wilderness is much closer than you think. Passed through, negotiated, unnamed, unacknowledged: the edgelands - those familiar yet ignored spaces which are neither city nor countryside - have become the great wild places on our doorsteps. In the same way the Romantic writers taught us to look at hills, lakes and rivers, poets Paul Farley and Michael Symmons Roberts write about mobile masts and gravel pits, business parks and landfill sites, taking the reader on a journey to marvel at these richly mysterious, forgotten regions in our midst.

According this review of the book in the Guardian, the zone goes

Given how close this pylon is to genuinely lovely countryside that's perhaps a bit harsh, but enough of the peripheral, let's discuss the pylon itself.  Long time readers and pylonophiles will have already spotted that it's a terminator pylon and in this case its at the end of the 132 kV line which starts further West in Witney and makes its way to Oxford via Farmoor reservoir. At this point, the voltage will be stepped down to a lower voltage to run either underground or on lower voltage overhead lines to a further network of substations. I'll go and investigate the next time I'm in the vicinity and I'll be sure to have a copy of Edgelands with me to read in the pub afterwards.