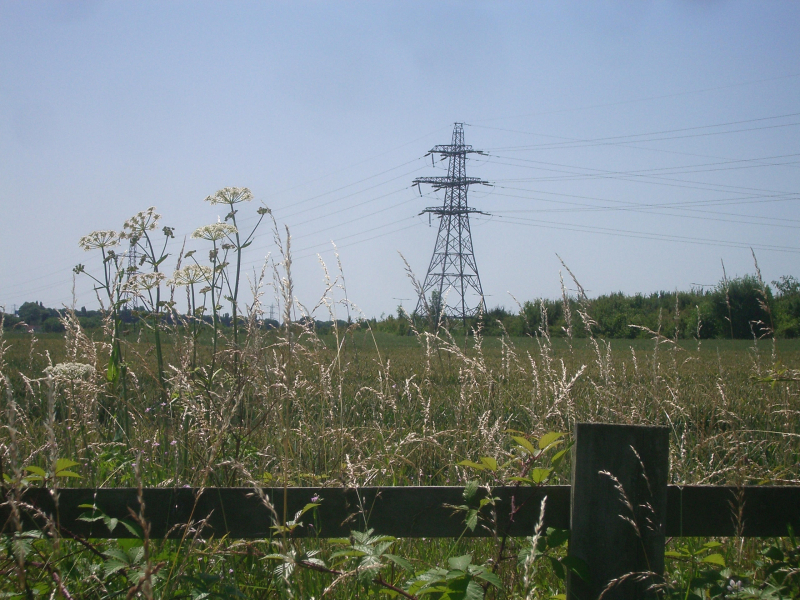 The start of a new academic year is always very busy and so September had slipped by before I had time to get a pylon on the blog. October had also started to slip away but two pylonless months would be inexcusable, so on the 11th day of the month, I'm finally sitting down to write.

October's pylon is from someone who is intrigued by power infrastructure and the email that conveyed the picture to me told of a happy day in the countryside, made all the more so by an encounter with pylons:

I took a walk today from Sandridge to Flamstead (17 miles) and although I thought my revised route was going to bypass the strange pylons, I ended up walking past them.

There were plenty of other photos and lots of wonderful details about the pylons, but this picture caught my eye because of the lovely juxtaposition of flowers and pylons. It reminds me of a Barbara Hepworth quote from an article I've referenced before when she noted:

"pylons in lovely juxtaposition with springy turf and trees of every stature” seen from the window of an electric train.

I'm not sure if these pylons can be seen from an electric train but they're on the 132 kV Elstree to Sundon line close to St. Albans, Hemel Hempstead and the M1 motorway.

The flowers also remind me of the linocut prints of an artist, Susan Wheeler, who lives near Oxford. You can see why below. 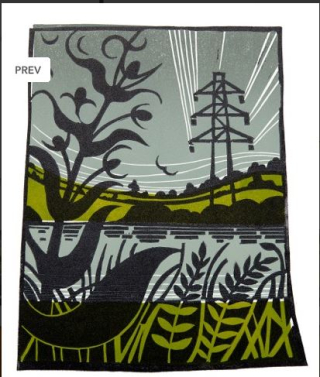 The pylon itself is rather unusual and is described in the email as a T-splitter. The lines head off in three directions so there are horizontal and vertical insulator discs on one pylon because it is both a suspension and a tension pylon at the same time. For more on tension and suspension pylons go to the February 2017 pylon which which also features one of the most beautiful images to have graced the blog. As always in these cases, please do get in touch with @pylonofthemonth on Twitter if you can offer more technical details on pylons like this.

That's all for now. I'll try best not to be late with November's Pylon of the Month.

I'll add it to my list of places to visit! Feel free to send a photo my way for the blog.

Come to Poole, particularly Wallisdown, pylons inform the landscape like nowhere else. The Bourne Valley nature reserve is one such area