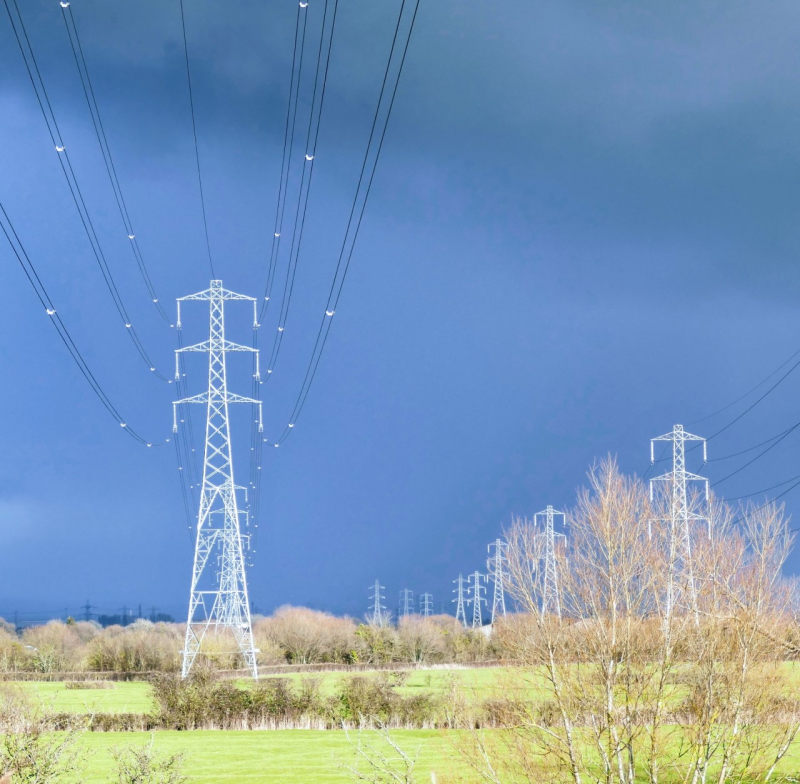 It was a dry January on the pylon front; a mixture of busyness and never quite getting round to choosing a pylon to write about. For February I thought I would feature plenty of pylons to make up for this and so here are two columns of them marching across the Welsh countryside. To be more specific, they are marching across the Gwent levels and were sent in by someone who listened to the online talk I gave last year courtesy of The Living Levels Landscape Partnership. It’s an organisation which “aims to reconnect people and communities to the Gwent Levels landscape and provide a sustainable future for this historic and unique area”.

The Gwent Levels are an inter-tidal zone of saltmarshes, mudflats and sands, revealed to keen eyes at low tide along the northern coastline of the Severn Estuary. The low horizon, flat landscape, and big skies (often enhanced by dramatic cloudscapes, sunrises and sunsets) give the Levels a unique ethereal quality.

The area has a number of power stations including the fairly new 800 MW CCGT Severn power station built on the footprint of the former coal-fired Uskmouth A which closed in 1981 and was demolished in 2002. Another CCGT power station (even bigger at 1140 MW), Seabank, is on the opposite side of the Bristol Channel. Close to this, at 1,618 m is the longest overhead power line crossing in he UK, the Aust- Severn crossing which has featured twice before on the blog in May 2014 and April 2018.

As well as the picture at the top of this article, the email also contained a number of other pictures of which my favourite was the one below. That’s all for this month, but 2022 has lots of great pylons in the pipeline so come back for more soon. 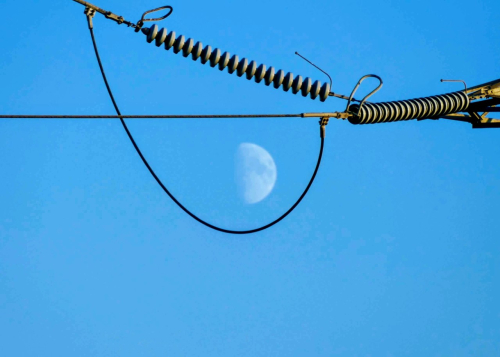 Hi Tony - I'm not sure about two of your questions, but I think the insulator discs just slide on so there is nothing in between them so they are only in contact with other insulator discs (and the wire). The spike/loop thing is as you say almost certainly something to do with discharge but I'll ask on Twitter (@pylonofthemonth) and there will almost certainly be someone who knows. The telescope sight is a Stockbridge damper. More information here https://www.pylonofthemonth.org/2013/06/pylon-of-the-month-june-2013.html

Hi there, I'm interested in knowing what the various small structures are on the pylon attachments. I know those large columns of discs (either glass or ceramic) are insulators, but what holds them together? That too must be insulated...

Secondly, I note that there are metal spike/loop pairs across each insulator, a spike on the tower end and a loop on the HT end. What are they for? They look like some sort of discharge apparatus, but I don't know why they'd be there.

Finally, a meter or two away from each tower mounting structure, the cable has a small attachemt that looks like a telescopic sight, one at each side of the mounting. Obviously they're not telescopic sightes, but what are they?

These are things I have always wondered about. Interesting site, btw...