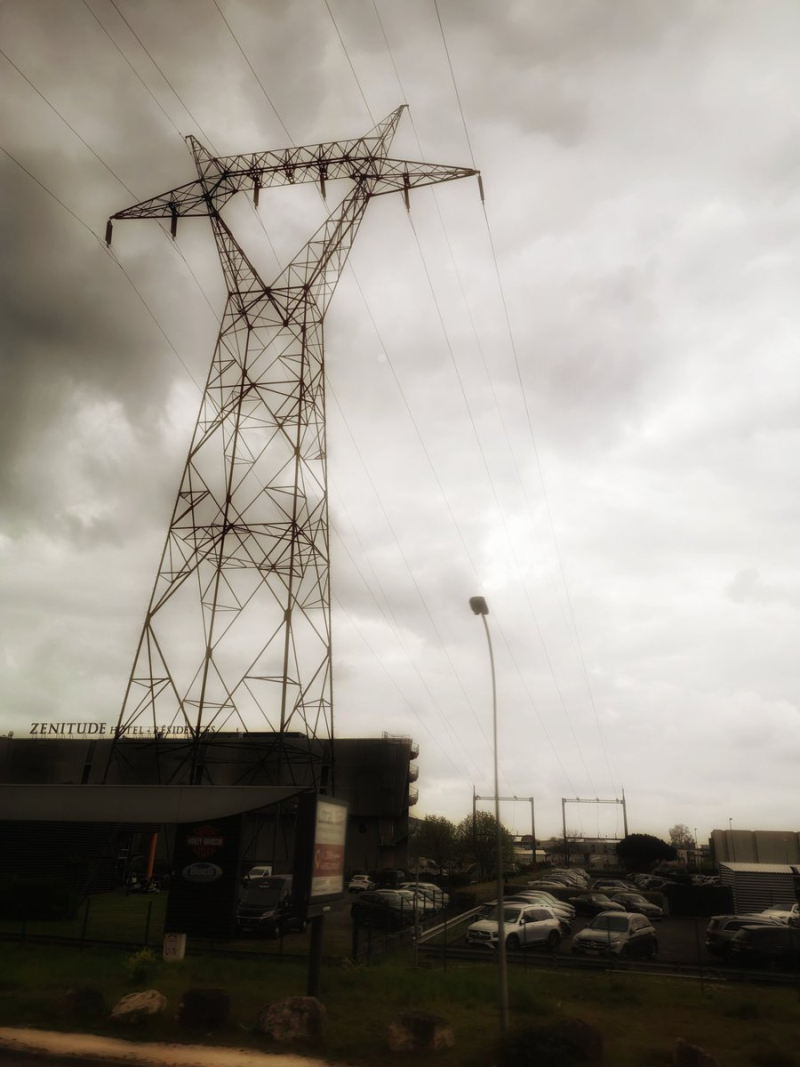 I'm planning to post April's pylon early in the month by way of atonement for not posting in March. Life just got too busy and (as usually happens when I skip a month) the can kept getting kicked down the road until I ran out of days. Part of the reason was that the end of March was spent in Bordeaux and although I could have gone full digital nomad and blogged from a cafe, I was too busy seeing the sights and enjoying the wonderful food and drink!

Back to this month's pylon, which I snapped whilst on the bus back to Bordeaux airport. If I'd woken up, unsure of where I was, then the pylon design would have alerted me to the fact that I wasn't in the UK. Sadly, however, my knowledge of French pylon design is close to non-existent, but the French Wikipedia page (Pylône électrique) revealed some intriguingly named designs, including Le pylône Chat and most intriguingly of all, Le pylône électrique Mae West (see below). I get the cat vibe with the upwards protrusions at either end looking a bit like ears, but the mind boggles with Mae West. For those readers unfamiliar with mid-twentieth century movie stars, she was, according to the Oxford English Dictionary, ".....a U.S. film actress and entertainer (1892–1980), noted for her large bust". According to Wikipedia, during World War II, Allied aircrews called their yellow inflatable, vest-like life preserver jackets "Mae Wests" partly from rhyming slang for "breasts" and "life vests" and partly because of the resemblance to her torso. I'm struggling a bit with a pylon's resemblance to her and neither am I confident about whether the one I snapped is a Chat or a Mae West, or for that matter whether the Mae West is a sub-genre of the Chat. That's the problem with Pylon of the Month; almost every time I write a post I end up with more questions than answers. Perhaps any fans of the website working in the French electricity sector will be able to help!

Le pylône Chat, or is it the Le pylône électrique Mae West?

Making a calendar is something I've thought about but not actually got around to doing! Perhaps for 2024.......

Is there a calender available

Sorry but I've got no idea about the postage stamp pylon, but thanks for bringing it to my attention!

Can anyone suggest why this Pylon, appears on a postage stamp?
Curious.
Arkansas River Navigation
https://www.stampcommunity.org/topic.asp?TOPIC_ID=13915&whichpage=11#737702

I think yours is more a Mae West (perhaps so named because it looks top heavy?) although it's a bit of a hybrid. The cats clearly have whiskers at the sides of their face!
https://fr.wikipedia.org/wiki/Fichier:Pyl%C3%B4ne_%C3%A9lectrique_de_type_Chat_400_kv.jpg